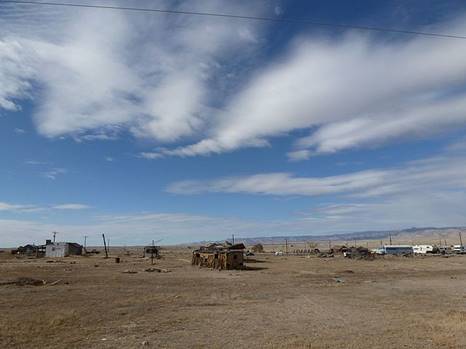 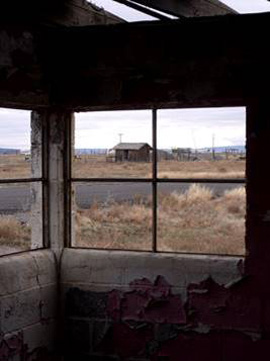 Cisco, Utah is literally in the middle of nowhere. Off of I70, northeast of Moab and east of anything, it once was a bustling community. The decaying structures, and plenty of old vehicles and other rusting wreckage, are left deserted in the lonely and vast desert. These relics are reminders of the former inhabitants and a once bustling little town.

Cisco was founded in the 1880s as a watering and service stop for the Denver and Rio Grande Western Railroad (now Union Pacific) that drew water from where the rafts take out on the Colorado River. Besides the water tank for the locomotives, some section buildings and a railroad station the town had a saloon and houses for railroad employees. In the days before diesel locomotives, steam engines had to stop to refill with water in order to continue their journey thus many small towns like Cisco were erected along the rail lines. Soon cattle and sheep ranchers from the nearby Book Cliffs, began to use the railroad station and the town became important as a shipping center where livestock products, primarily wool, were transported to markets One of the town’s booms happened in 1924, when natural gas and oil were found nearby. Although the supply lasted for short period of time, it gave an additional boost to the growth of the town and for a while Cisco became one of the largest producers of oil in the state of Utah. In the 1940s and 1950s, ordinary Americans discovered that cars opened adventures and they began taking on long distance road trips. This new way of life for the Americans, and interstate truck commerce brought more development to the more than 200 residents of Cisco. Restaurants, bars, and gas stations were opened in order to provide 24/7 service to the road travelers. 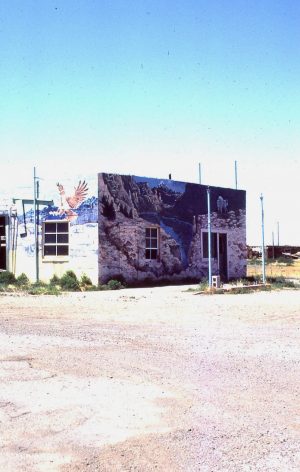 In the 1950s, when trains were modernized and steam engines were replaced by diesel motors, towns like Cisco lost their importance There are approximately one hundred buildings in various states. Most of them are in a bad and ruined condition but some of the houses are just as they were left when their owners moved out, with all of the furniture and items in them. The roofs of many buildings have collapsed and only a few of the houses are periodically inhabited. The town was vandalized over the years, so no trespassing signs are scattered around. A new oil and gas boom began in 2005 but Cisco only has a few residents. Many people think Cisco is the inspiration for Johnny Cash, who wrote a song about it and its gas station, named Cisco Clifton’s Fillin Station. Also many movies were filmed there, like Vanishing Point (1971), Thelma and Louise (1991) and Don’t Come Knocking (2005). Cisco Clifton’s Fillin’ Station.  Now the bridge is gone, the station is gone, the people have changed.  What is left is concrete, asphalt, and commonplace.

Johnny Cash
Cisco Clifton had a fillin’ station
About a mile and a half from town
Most cars passed unless they were out of gas
So Cisco was always around
Regular gas was all that it sold
Except tobacco matches and oil
Other than that he fixed lots of flats
Keepin’ Cisco rough hands soiled
He’d wipe the gas and check the air
In a hundred times a day
He patiently gave directions
On how to get to the state highway
Usually he’d give ’em water
Or a tyre or two some air
And once a big black Cadillac
Spent seven dollars there
He’d give anybody anything they’d ask
And lend anything he had
His tools are tyres bumper jacks or wire
To the good ones or the bad
In wintertime there was a depot stove
And a table for a checker game
And every mornin’ at sunup
The same checker players came
So Cisco Clifton’s fillin’ station
Was always in the red
Personal loans were personally gone
But never a word was said
One mornin’ at eight, them checker players
Heard a big bulldozer roar like a freight
And Cisco said I hope my kids stay fed
When they build that Interstate
He’d managed to pay for property
Where his little fillin’ station sat
And friends still came for checker game
So Cisco settled for that
He wouldn’t say so but Cisco knew
That the Interstate was too much to fight
But to keep his will and to pay his bills
He did odd jobs at night
He still opened up at sunrise
And the checker game went on
The cars flew past on highest gas
And the neighbors had sold out and gone
If a car ever did go by he was lost
And if they stopped they were treated the same
So at Cisco Clifton’s fillin’ station
There’s a howdy and a checker game
——–
The Cisco and Utah desert oil and gas field was discovered in 1924, and is one of the oldest oil fields in the
state of Utah. (The others being the Ashley Valley Field about 6 miles east of Vernal off U.S.40 and
Goodridge’s Mexican Hat oilfield) The Cisco field has been developed intermittently since then with the
discovery of several small accumulations of oil. The field lies along a larger feature known as the
Uncompahgre Uplift that is a boundary between Paradox Basin, the Uintah Basin and the Piceance Basin.
The field is actually a series of localized oil accumulations that produce from several different channel sands in
the Mancos, Cedar Mountain, Dakota, Saltwash and Brushy Basin zones (Morgan, 1999 and 2001). Natural
gas and Oil is produced from the Mancos, Cedar Mountain and Dakota formations, while the Brushy Basin and
Saltwash production is mostly crude oil.
Cisco Springs Oil Field in relation to other fields in the area and along the Cottonwood Creek Anticline
The productive reservoirs are either structurally controlled by Horst and Graben features or isolated
stratigraphic traps related to either lithological or permeability pinch outs (Tedesco, 2013). The field is along to
Cotton Creek Anticline (Morgan, 1999). The depth for production ranges from 900 to over 2,000 feet. The field
straddles the I-70 highway between Moab and Grand Junction.
The oil gravity is 34–35 degree API while the natural gas is 1,100 BTU (1,200 kJ). The oil is both derived
locally as in the Mancos, Cedar Mountain and Dakota sandstones from the adjacent Dakota shale. The oil in
these reservoirs is typically a moderate to light green color. The oil found in the Saltwash and Brushy Basin
reservoirs contain a heavier black oil that is Pennsylvanian in age and has migrated from the adjacent Paradox
Basin.