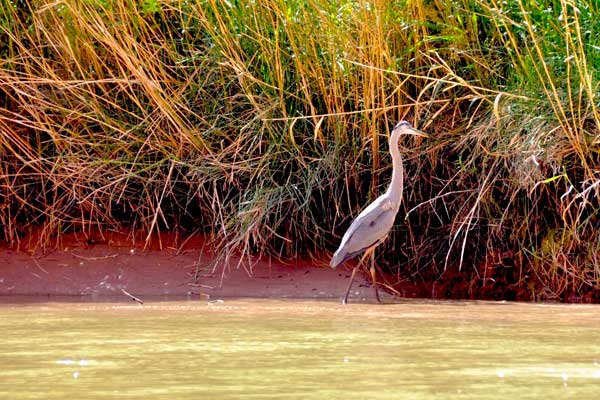 Whenever my friends from the east coast come to visit me in Salt Lake City, among their first comments is some bewilderment with the mountains. “Oh you have real mountains.” Yes, I guess we do, but I don’t seem to notice anymore. I have been acclimated to the mountains, to feeling like a speck within a landscape of snow-capped giants. They are so much a part of my given landscape that I find that I can’t even orient myself without some mountain range nearby. If I were a fish, the mountains would be my water; so essential and ubiquitous that they fade to the background of everything else.

I am lucky to live in a place where I can take many such wonders for granted: the red rocks of the Colorado Plateau, the salty brine of the Great Salt Lake, the roaring magic of the Green and Colorado Rivers. I was so spoiled growing up near this lake and these rivers that I thought Great Blue Herons were a common bird, big wild pigeons. But those who didn’t grow up here, I have come to realize, Great Blue Herons are godly beasts, a seven foot miracle swooping down to the edge of the water in a casual and graceful manner. 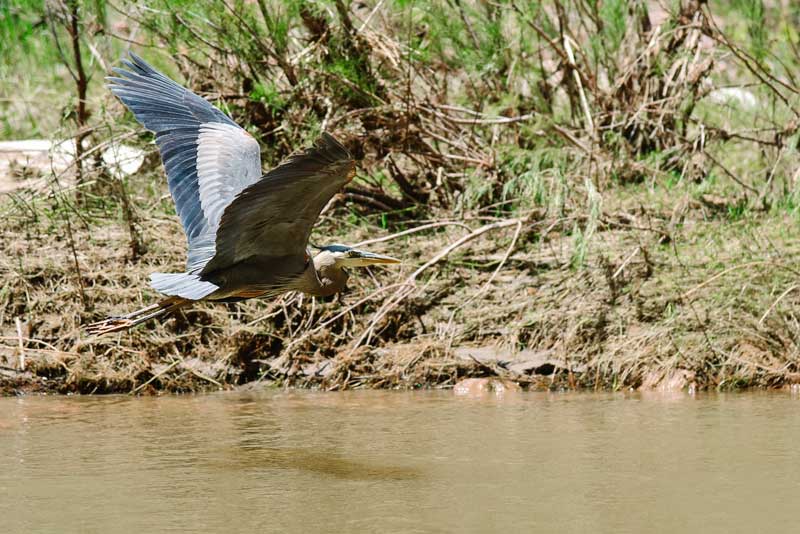 As far as bird-watching goes, they are the low hanging fruit along the Colorado River. Search “Great Blue Heron Colorado River” on Google and you will find dozens of travel blog entries with magnificent pictures. A little bit less blue than you might think, these birds astonish with their size and movement rather than their color. The largest of the North American Herons, the Great Blue stalks the earth with stilt legs and a long, lively neck. With their gigantic wings folded to their bodies and a small head pushing up like a periscope, they look almost out of proportion. But, when taking flight everything seems to come into alignment: the wings extend to reveal spikey fans of feathers that push the air in slow beats as the head extends and retracts in balanced precision.

Great Blue Herons frequent the edges of our rivers to throw their heads like harpoons into the water. They catch all kinds of fish, but have also been known to go after small mammals, like gophers. If you are really curious about the Herons’ habits and can’t make it on one of our trips right away, you can try your luck with this live feed from Sapsucker Pond in New York, prime Heron habitat.

The mountains still inspire me, even though they are common. They don’t inspire me like a lightbulb going off, but like an old friendship: slowly by foundationally. The things we live with become our unacknowledged muses, become integrally intertwined with our own lives. Terry Tempest Williams, acclaimed writer of the west, has “a beautiful wood carving of great blue herons [that] draws me to my desk each day.” And she has written a whole book titled When Women Were Birds. But she was not the first to become entangled with a Heron. In The Wishing Bone Cycle, a collection of poetry from the Swampy Cree Nation (Maskiki Wi Iniwak), there is a poem named “Woke Into Heron” that speaks best to the deep connection between these birds and us humans.

Woke Into Heron
She was tall, you could see her
in the distance before anyone.

Once, in late summer,
she stood so long at the edge
of the swamp
we thought she was ready
to leave with the herons.

You could see her standing
Very still.

The day the herons left
she stayed. The next day she woke as a girl
all right, but she began being a HERON!
She took long steps, slowly, as if she was
walking in water, hunting in water.
This is true, and she did this
making heron noises.

AND had thin sticks
tied out from her feet
to make heron tracks.

This went away
the next morning. Everyone
was happy she would no longer
go sleep in the water reeds.

This was the first time we saw someone
do this, so we named her
not to forget it.

(from, “Woke Into Heron” published in The Wishing Bone Cycle: Narrative Poems from the Swampy Cree Indians, gathered and translated by Howard A. Norman, Stonehill Publishing, 1976)

Easton Smith is a Local Wasatch Front resident and writer.   He spends his time community organizing, rock-climbing and playin’ some mean banjo.  For more writing from Easton, check out his personal blog or stay tuned for future loggings in River Currents.