Gates of Lodore: A Poem, a Novel, and Two-Year-Old Biscuits 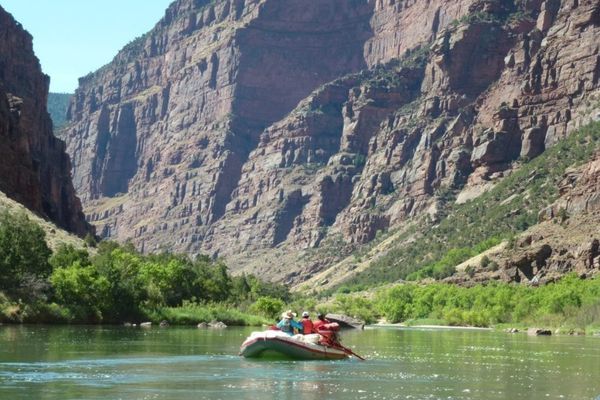 Scratch the skin of a typical nineteenth-century western explorer and you’ll find a Romantic soul inside, ready to quote Wordsworth or Lord Byron in celebrating the awe-inspiring crags and waterfalls of the Rocky Mountains.  John Wesley Powell employed plenty of adjectives like “sublime,” “awful,” and “glorious” to describe the wonders of the Colorado River canyons as seen on his voyages of 1869 and 1871. But it was Andy Hall, a crewman on his first voyage, who reached for some Romantic-era verse in naming the “Cañon of Lodore,” a marvelously scenic stretch of the Green River in what is now Dinosaur National Monument. 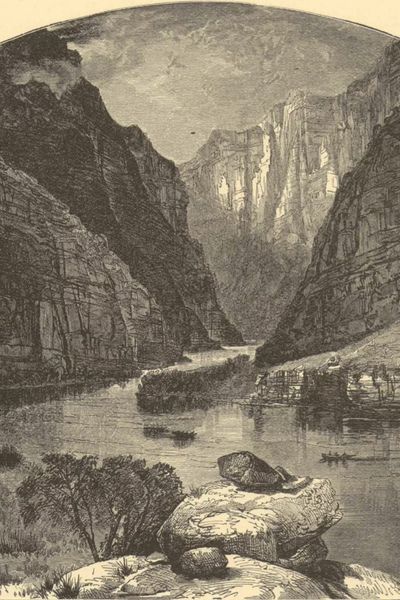 The Gates of Lodore, fig. 8 in J. W. Powell’s Exploration of the Colorado River and its Tributaries (1875)

Hall undoubtedly had in mind a poem titled “The Cataract of Lodore,” written in 1820 by Robert Southey. It’s a long, playful verse in which a father describes to his children “the pouring and roaring/and waving and raving/and tossing and crossing” of a cascade in the English Lake District. The poem is nearly forgotten today, but the name lives on in the Gates of Lodore, the towering cliffs of reddish quartzite, sandstone, and conglomerate which herald the whitewater journey down the Green in northwestern Colorado.

The rapids of Lodore would prove to be anything but a lark for Powell’s crew in 1869. Not far down the canyon, they ran one of their boats, the No Name, onto a rock, breaking it in two and losing most of its contents in the river. They named the rapid Disaster Falls. 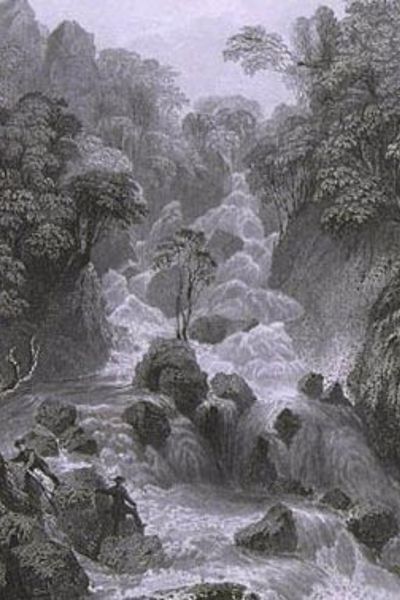 The Cataract of Lodore in England’s Lake District; Wordsworth Foundation

Lodore shows up again as the title of an 1833 novel by Mary Shelley, author of Frankenstein. Her character Lord Lodore meets his end in a duel early on, so perhaps Andy Hall had a sense of foreboding as he contemplated the difficult whitewater that lay ahead. Their troubles led them to portage many of Cataract Canyon’s rapids farther downstream, costing them time and supplies. It was an uneasy and near-starving crew that faced the last miles of the Grand Canyon late in the year. Three of the men gave up and struck out overland to what they hoped would be safety, but in fact would bring about their deaths, probably at the hands of some mistrustful Paiute Indians. Yes, there was romance to be found in the cliffs and cataracts of the Plateau Province, but lofty sentiments come easiest on a full stomach and not too much danger.

Powell’s second expedition down the Green and Colorado Rivers in 1871-72 came off somewhat easier, although the crew were still using heavy wooden boats and employed the soon-to-be-obsolete method of rowing downstream in the rapids, rather than pulling against the current. Frederick Dellenbaugh, at seventeen the youngest member of this expedition, recalled lighter moments such as when they came across a hundred-pound sack of flour the previous expedition had left behind at Disaster Falls. “Andy that day made our dinner biscuits from it. Though it was two years old the bread tasted perfectly good.” Dellenbaugh attributed its preservation to the dry climate. “The flour was left on the rock and may be there yet,” he wrote in his 1904 reminiscence, The Romance of the Colorado River.

A trip down Lodore today will certainly inspire the poet within you. Dellenbaugh observed that “Lodore is only 20 miles long, but it is 20 miles of concentrated water-power energy . . . never for a moment does it relax its assault, and the voyager on its restless, relentless tide, especially at high water, is kept on the alert.” In today’s rafts, these rapids are much more fun than Powell’s crew ever could have hoped, plus there’s the romance of following in the figurative tracks of old trappers and pioneer river runners.  And the dutch-oven fare served up by Holiday’s guides is a whole lot fresher than Andy Hall’s biscuit flour!