Fun and Fabulous Boat Names: A History, Part I 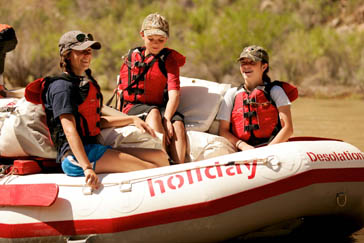 by Julie K. Trevelyan
Holiday River Expeditions’ boats have some great names.  You might wonder where they all come from. After all, what exactly is an Unktehila? Who was The Major, and why does he rate having a boat named in his honor? All of these questions are exactly the reason founder Dee Holladay decided to name rather than number his boats. He wanted our guests to ask why, what and who for? It opens up the door for the guides to share their knowledge of the river canyons, the colorful history and the cast of characters, both human and Jurassic. We decided to delve into some of the stories behind the names and provide you with a little more knowledge the next time you push off on a river rafting adventure with Holiday River Expeditions. 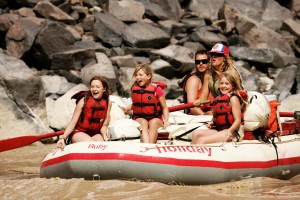 This boat is named after a section of the Colorado River above Westwater Canyon. Ruby Canyon is part of an area generally known to boaters as Ruby/Horsethief. This section has become increasingly popular with boaters over the past decade, for its lovely scenery and gentle flow. River: Colorado

Named after Whirlpool Canyon on the Green River, Lodore Canyon trip. A favorite rapid of guides through here is known as Headstand Rapid where, you guessed it, people attempt headstands through this gently bubbling rapid! River: Green or Yampa

This is the last section of the Green River on the Lordore Canyon trip before the take-out. A generally meandering, gentle section of water, Split Mountain still has a few curves to throw the river guides. River: Green or Yampa. 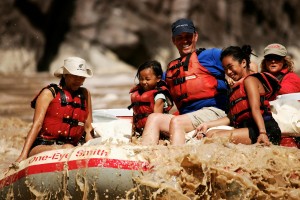 A gold digger and trapper in Cataract Canyon, Smith of the single eye was prepared more for capturing animals than running rapids. Deemed to be the first to run the Dark Canyon rapid through Cataract Canyon, he disappeared after his third journey through the famed and rather feared Cataract. River: Colorado.

This mouthful, which actually sounds fairly smooth when you get the hang of it, is often depicted in ancient Utah rock art. Believed by several Native American traditions to be a dangerous water monster, legends of the Unktehila were most likely inspired by ancient discoveries of dinosaur fossils. Beware the ferocious Unktehila, as it may prowl through your dreams in the water-carved canyons of your river trip. River: Green or Yampa. 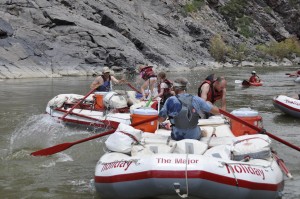 The Major during water battle

John Wesley Powell is well known as the first white man to dare raft the mighty Colorado River. But not everyone knows he was a major during the Civil War. He lost an arm during battle, so he holds the honor of not only being the first white person down the Colorado, but probably one of the very few to do it literally single-handedly. River: Colorado or Green