Endangered Species and the River Rafts Named After Them 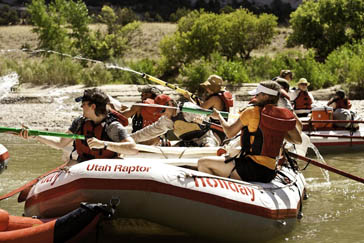 Endangered Species and the River Rafts Named After Them

As I’ve discussed before, Holiday River Expeditions cultural fabric is steeped in homage and references to many aspects of desert life. From the ecosystem to the historical figures, the landmarks to the species that inhabit our beloved river canyons.  It’s no secret that our founder, Dee Holladay names our boats for benchmarks of river life. But lesser-known are the specific reasons and backstories to these hard-earned names.  In this entry, I’m examining three particularly well-known and well-traveled members of the Holiday River Expeditions raft fleet.  They’re known amongst guides and management as the ‘fish boats,’ for reasons that carry heavy ecological implications and healthy reminders of origins and past of the habitat we visit. 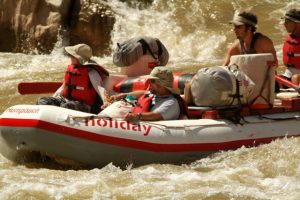 The Humpback Chub was already regarded as rare when first noted in the first half of the 20th century, and sadly this hallmark of canyon life found its way to the federal Endangered Species list by 1967.  Signs point to nonnative fish (both predation and competition) as chief issues in the population decline, as well as ecosystem changes from man-made ventures.  Ecologically speaking, a dam is one of the worst things that can be done to a river environment, and strong indications suggest that our metaphorical footprint on the Humpback Chub’s home has contributed to this significant decline.

Fortunately, with increased awareness and environmental stewardship, numbers show a recent increase (particularly in the last decade).  Time will tell if we avoided disaster when it comes to this native inhabitant. 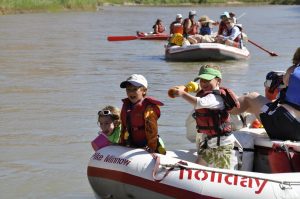 The Pike Minnow carries quite a reputation for bulk, having once regularly yielded catches approaching six feet in length.  A marked trend in decreased size emerged throughout the 60s and all the way through the modern day.

Once common throughout the Colorado basin, the species is now largely restricted to the upper parts of the Colorado river system.  Our usual and familiar culprit, damming, has had some say in this, as well as the subsequent diminished idea habitats.  Successful transplant efforts have been made, although a focus remains on restoring a robust pike minnow population to their native turf.

Regulating agencies have looked into operating dams on schedules more reflective of natural patterns to encourage the population.  This effort has been complemented by an initiative to better marshal and regulate non-native species, but the frustrating reality is that the delicate balance has already been tipped and will be difficult to restore. 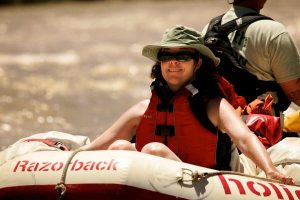 The evocative name of the Razorback Sucker is well-earned; this references the anterior back, home to the distinctive dorsal fin.  Razorbacks have been known to reach up to 3.3 feet in length and boast weights of up to 13 pounds.

This native fish once shared the neighborhood of the Colorado Basin with its aforementioned fellow tenants, but populations have bottlenecked and are now restricted largely to just above the Grand Canyon and a few lakes on the lower part of the river.  Once again, habitat destruction seems to be a chief culprit, and the Razorback Sucker followed the Humpback Chub onto the Endagered Species list by just a few short years.

Where native species, and specifically fish are concerned, it’s not all bad news.  As I mentioned earlier, at least one of our highlighted populations has seen a recent resurgence. Hopefully owing to conscientiousness by stake-holding parties.  Holiday tries to do its part by rigorously practicing Leave No Trace ethics, both on the river and at home around the warehouse.  Ultimately, dams have done more damage than we can hope to undo with any quick-fix scheme. We can certainly eliminate the possibility of becoming more of a problem and, in doing so, continue to respect the river ecosystem that grants us so much beauty.