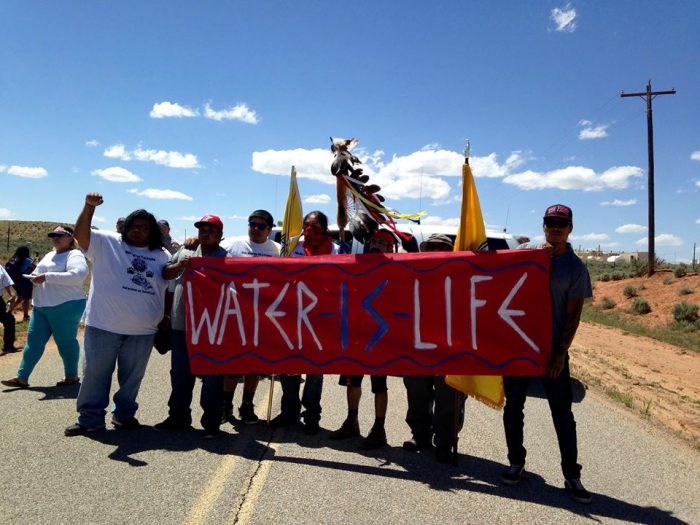 Downwind & Downstream. I am strangely relieved to see the uranium mill in the distance. They said “wear comfortable shoes” in the event description. I wore my ‘cool’ boots instead, and the four mile walk has produced some hot spots that could soon turn into blisters (how many times has solidarity been prevented by bad planning?). But I am still energetic, kept afloat by banter with old friends from Moab and new friends from the White Mesa Ute community. The march moves slowly along the side of the 191, at a conversational pace. 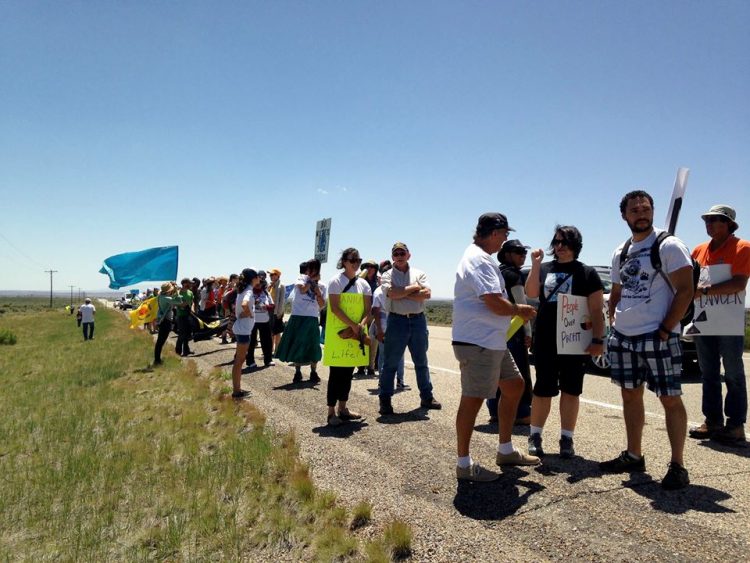 I meet a man who moved down to the White Mesa community ten years ago to live where his wife was raised. He points out his house as we pass it, “the blue one.” He’s jovial, despite the fact that we are marching to bring attention to the radioactive pollution from the last operational uranium mill in the country. I meet a woman who lives in Bluff and creates huge pieces of ‘land art’ to represent the importance and beauty of the now endangered Bears Ears national monument. She and I discuss the confusing web that is the term ‘white ally’. I meet a young man carrying a banner that says “NO URANIUM, Protect Sacred Land”. He grew up here and has learned through experience that water is life; Or, at least that it should be.

The water here is polluted. As Kate Savage put it in her blog about sacrifice zones: “Radioactive waste is trucked in from across the U.S. and Canada. It runs through the mill and flows out as toxic sludge, held in huge square pools of water that cover 275 acres. The water is acidic, radioactive, full of heavy metals. The liner to some of the pools is a single layer of PVC, that was inadequate from the beginning and should have been retired over a decade ago. Water sampling between the mill and the tribe’s lands already finds the groundwater — the main source of water for the people of White Mesa — is turning acidic and filling with heavy metals.” This, along with a whole list of other atrocities related to the mill, has been going on since 1979. And the White Mesa community has been resisting all along.

Perhaps this is why the mill owners, a Canadian company named Energy Fuels Inc., can anticipate that the marchers will want to come right up to the front gate of the mill. They have sent out some employees to block the access road with puffed-up trucks and puffed-up chests. Their tough, smug faces and angry demeanor remind me of pictures I have seen of the racist thugs who violently harassed the brave young civil rights activists who sat in segregated lunch counters. I am worried that things will quickly escalate.

As the march reaches the blockade I hear cries, not of pain or anger, but of resilience and bravery. High-pitched yelps like a song fill the air as the march pushes forward. The big-muscled men form a barrier with their bodies and begin to yell, foam pouring from the sides of their mouths. “You can’t come in here!”. I feel myself and everyone around me hesitates, but we are pulled ahead by the unflinching bravery of the native leaders in the front, who simply walk through the men’s linked arms. One hundred yards down the road, the Bureau of Indian Affairs (BIA) police officer finally pulls his car across the road, lights blaring. “It is a private driveway. Speak your peace, then please turn around,” he says to the marchers. 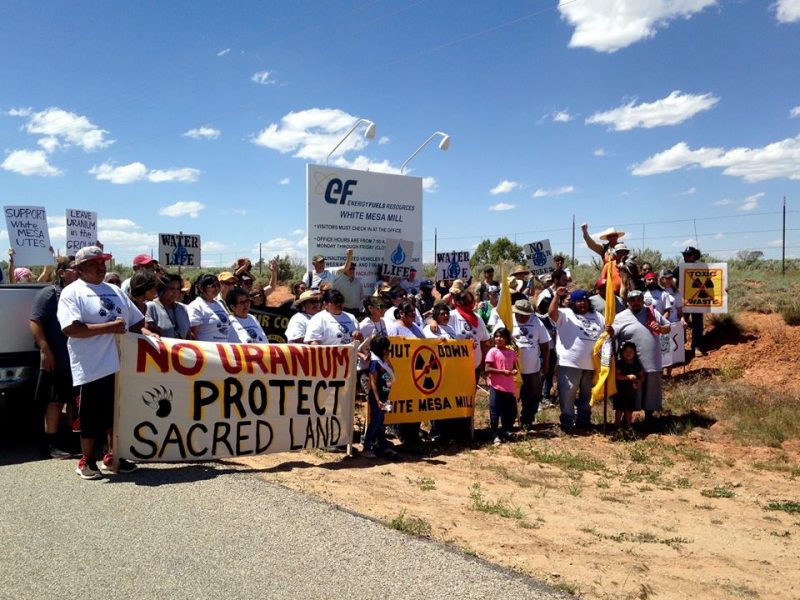 This sets off a series of fierce rebuttals about whose land it really is that we stand on, whose land has been ripped up and stuffed full of toxic waste. Thelma Whiskers steps in here to educate us all about the history of this place. She is a Ute elder who helped to found the White Mesa Concerned Community group. “I’ve been living in White Mesa for over 60 years,” Thelma declares to the crowd in an impressively loud voice. “We’re here for our kids and grandkids. What we’re really worried about is the water, and also the air. When the wind blows, the dust comes towards our reservation.” She gestures towards White Mesa and the crowd cheers. The BIA cop sits stone-faced. The white men who tried to block us from entering are hanging off their trucks menacingly. There are five of them, one hundred of us. “Mni wiconi! Water is life!” we shout at the hostile men to all sides, at the machinery and the bland, tin buildings that sit on the other side of the fence. 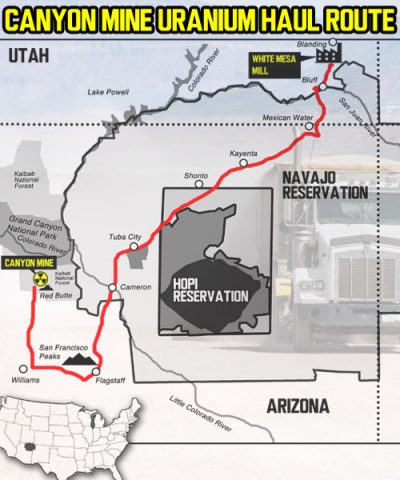 After the march ends we return to the White Mesa Community Center in shuttles, where the march’s organizers thank us and tell us stories of illness and triumph, of the long but largely ignored movement to close the uranium mill. A young woman gets up to speak, I recognize her as the one who held a banner saying ‘Haul No!’ during the march. She has come from Arizona, near the Grand Canyon, where she is organizing against a proposed haul route that would carry uranium from the Canyon Mine up to White Mesa, cutting through the Navajo Nation. The trucks could carry up to thirty tons of highly radioactive material a day with only thin tarps to protect from spills and air pollution. They would cross both the Little Colorado and San Juan Rivers in their route.

With a nuclear reactor leaking into the Pacific Ocean from Fukushima and increasing tension in nuclear arms races across the world, do we really want to pull more uranium from the ground? Do we really want to risk an accident that would send that uranium into the primary water source of forty million people in the Southwest? White Mesa should serve as a warning to the rest of us, with its cancer and asthma rates. But White Mesa should also serve as an example, an inspiration, with their decades-long resistance to pollution and corporate negligence.
As I am leaving the Community Center, I run into a young man that I saw speaking with the mill workers who blocked the march. “Did you know those guys?” I ask. “I went to high school with one of them,” he answers. “He thought we were buddies, he said he knew me, understood me. But I told him that if he puts the mill first, if he pollutes the water, he doesn’t really know me.” We may live in the Colorado Plateau, but do we really know it? Do we know the downwinder communities and the location of the tailing piles? Driving away from White Mesa, I know I have a lot more to learn.