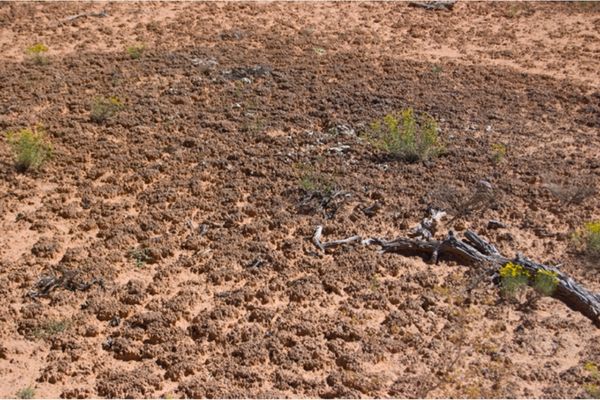 If you’ve ever gone hiking through the jaw-droppingly stunning Utah deserts, you’ve probably seen signs posted along the trail asking that you do your best not to “bust the crust”.

(Side note—if you haven’t gone hiking through the jaw-droppingly stunning Utah deserts, what the heck are you waiting for?)

Assuming the sign did not include any more information or assuming you didn’t take the time to read past the first line, let me tell you what it means to ‘bust the crust’ and why it’s imperative that you don’t.

The crust in this context is referring to the cryptobiotic soil that covers large swaths of south-eastern Utah, spreading out past the four corners into the deserts of Colorado, Arizona, and New Mexico. Cryptobiotic soil is often dark in color and can appear spongey, but the most important thing you need to know about it is that it’s made up of living organisms such as cyanobacteria, algae, and fungi. We see cryptobiotic soil on all of our river trips so it’s an integral part of our interpretation. 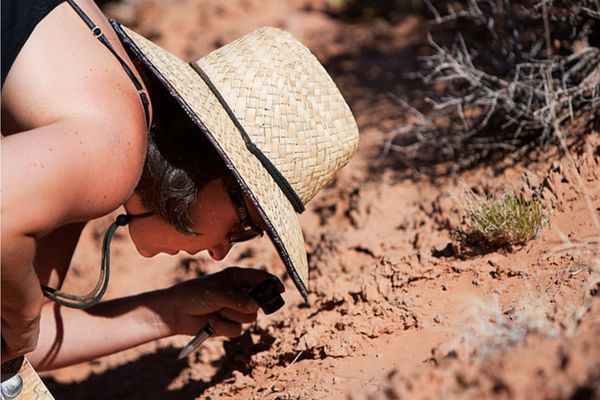 Why is Cryptobiotic soil so important?

When the soil is dry, the living organisms inside it remain dormant, but when the cyanobacteria in the soil get wet, they become active. According to the National Park Service experts, active cyanobacteria move through the soil, “leaving a trail of sticky material behind. The sheath material sticks to surfaces such as rock or soil particles, forming an intricate web of fibers throughout the soil.”

And why does that matter? Great question.

The NPS goes on to explain that through this process, “loose soil particles are joined together, and an otherwise unstable surface becomes very resistant to both wind and water erosion.” The cryptobiotic soil is sort of like a shield—hence why it’s often referred to as a crust—which can protect the fragile land underneath it. This has a positive impact on the health of local plant life and can help defend the area from ecological disasters like mudslides.

This soil has other very helpful properties as well. For instance, its ability to take nitrogen out of the air, and give it to rooting plants that can use it to grow and flourish. This is especially important in a place like the desert, where nutrients are often hard to come by.

Another important thing to note about cryptobiotic soil is that it takes a long time to form. Some experts believe that modern-day crusts in certain areas could be thousands of years old, and estimate that once those crusts are destroyed, it can take a very long time for them to recover if they ever do.

“Impacted areas may never fully recover. Under the best circumstances, a thin veneer of biological soil may return in five to seven years. Mature crusts can take 50 years to strengthen. Lichens and mosses may take hundreds of years to recover.”  (NPS)

The most common factor in cryptobiotic soil destruction is simply surface disturbance—which includes everything from heavy machinery driving on top of it, to over-eager hikers treading in areas they shouldn’t be. These soils, like many other delicate ecosystems, are also negatively impacted by air pollutants and climate change.

What are the impacts of Cryptobiotic Soil destruction? 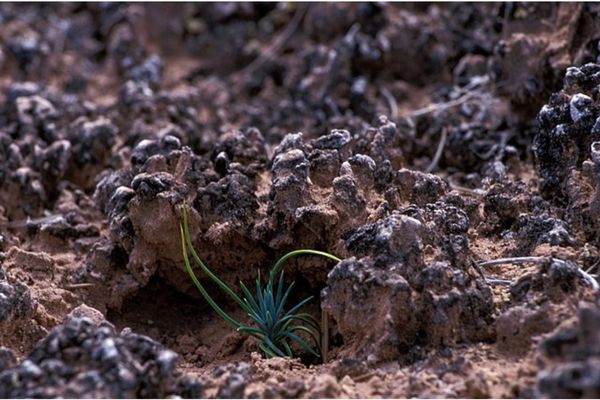 As we’ve outlined above, one of the most significant features of cryptobiotic soil is the way it protects the land against erosion. But when this soil is destroyed, and the earth underneath it does erode, what can happen?

That said, in regards to Utah specifically, there are two concerns that locals and visitors alike might be particularly interested to learn about. First, is the way soil erosion can affect the air quality, which in some parts of Utah is already the worst in the country. And second, it can negatively impact the snowpack, which means it’s one of the many factors leading to shorter and shorter ski seasons each year.

Earlier this year, in an interview for Wired Magazine, soil ecologist Rebecca Finger-Higgens, had some dire projections for what could happen if the biocrust in the South Western US continues to be destroyed.

“Without the biocrust,” she said. “We’d have no soil. The soil would have been blown off into the river. We’d be inhaling it. We wouldn’t be able to grow crops.” She went on to say that biocrusts help to prevent dust storms, like those seen in the dust bowl era of the 1930s.

Breathing in dust, in case you didn’t know, is not good for you. The particles that make up dust and soil can be so small, that they can penetrate the lining of the lungs, and once they do, they stay there. No amount of coughing will bring them out. As these particles accumulate, they can cause all sorts of health problems, including but not limited to chest pain, fatigue, and heart attacks, and for people who are exposed long-term, there is a risk of coronary artery disease. 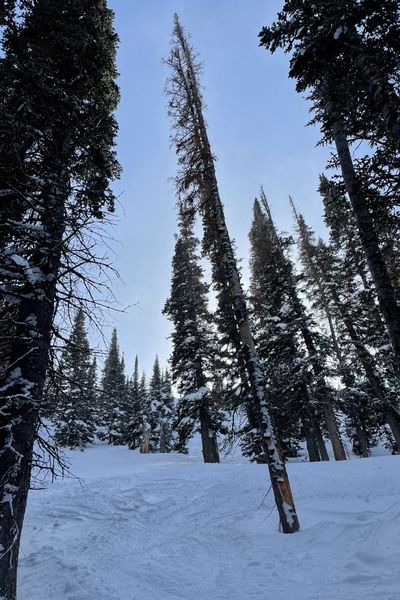 One of the lesser known problems associated with soil erosion is the impact it can have on snow. When dust is kicked up, it often settles on glaciers and snowy mountains, which lowers what’s called surface albedo.

An oversimplified definition of albedo is that it’s a measurement of the amount of solar light reflected off a surface. If that number goes down, it means more light is being absorbed rather than reflected, which in the case of glaciers and snow, leads to everything melting at a faster rate. Combine this with the fact that recent studies show many popular Utah ski areas are warming at a quicker rate than global averages, and you can see why those who care about this industry should be doing everything they can to protect cryptobiotic soils.

Let’s set aside conversations about ski seasons and dust bowls for a second, and just remind ourselves that cryptobiotic soil is made up of living organisms. Yes, the destruction of this crust will have a negative impact on us humans. It will affect our health, it may cause ecological disasters that can damage our homes and communities… and it will definitely put a dent in some of Utah’s most lucrative tourist industries.

So next time you think about going off-trail to get a good picture, or your friend invites you to go out on the ATVs, maybe the threat of a bad ski season will be what changes your mind.

Or maybe it’ll be the reminder that this soil is alive, it has been for hundreds if not thousands of years, and it is helping us. It deserves better than to die a purposeless death under the heel of your Vibram sole. 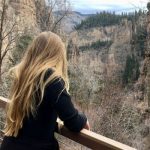