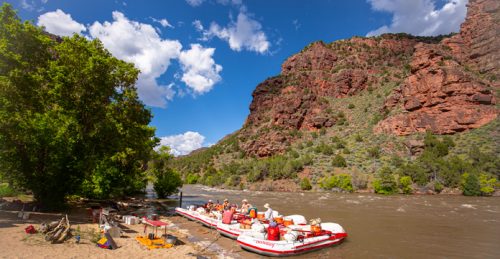 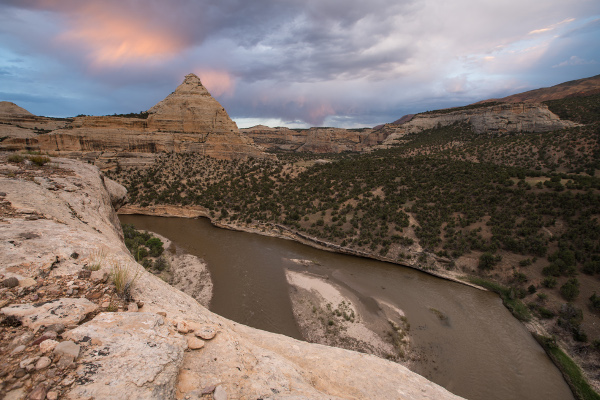 The first time I saw the fossil wall at the Carnegie Dinosaur Quarry, I felt like I was eight years old again, absolutely speechless to see bones, actual dinosaur bones, not casts, still laying in the rock where they were deposited almost 150 million years ago. There was an Allosaurus skull, jaws agape, each tooth in perfectly sharpened place, vertebrae proceeding in order from the base of the skull. Femur bones, shoulder blades, rib bones, claws, and teeth of other dinosaurs lay jumbled together in other parts of the display. The wall is an astonishing record of ancient beings, and the choice to display the fossils in situ provides a powerful learning experience and makes the science of discovery clear.

Earl Douglass was a paleontologist with the Carnegie Museum in Pittsburg, Pennsylvania, sent to northeastern Utah in 1909 to hunt for dinosaur bones. While exploring a sandstone ridge not far from the town of Vernal, Utah, Douglass “saw eight of the tail bones of a brontosaurus in exact position. It was a beautiful sight.” The Carnegie Quarry began with the discovery of those tail bones. By the time President Woodrow Wilson declared the quarry a national monument in 1915, it had expanded to cover nearly 80 acres.

The “Wall of Bones” was Douglass’ idea. “I hope that the Government, for the benefit of science and the people, will uncover a large area, leave the bones and skeletons in relief and house them. It would make one of the most astounding and instructive sights imaginable.” A gorgeous glass structure encloses the wall, which is a sloping expanse of sandstone with over 1,500 individual bones, excavated in beautiful 3D relief. Although today the name “Dinosaur” only represents a fraction of what the monument has to offer, it remains as a tribute to the fossils that started it all. In 1938, President Franklin D. Roosevelt signed a proclamation that added over 200,000 acres to the monument, specifically including the canyons of the Green and Yampa rivers. With this addition, Dinosaur’s identity grew deeper, wider, and richer. 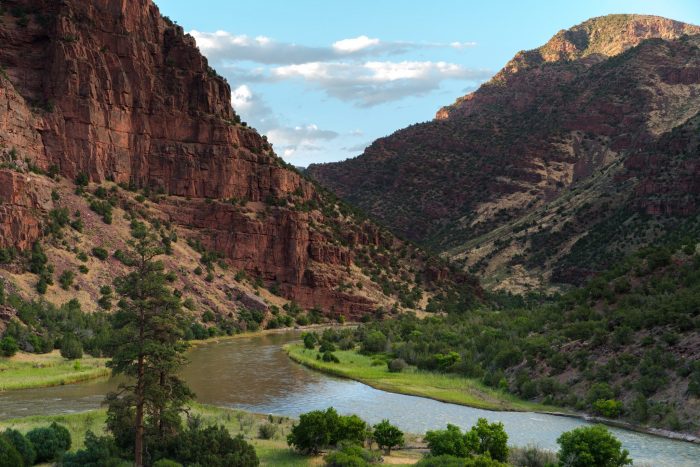 From Riparian to Alpine

On the northern boundary of the monument, in northwestern Colorado, the Green River cuts a straight channel directly into the red walls of Lodore Canyon, running over rock-strewn rapids beneath cliffs studded with lush, piney growth. The water is typically shallow, cold, and clear; the river’s flow is controlled by the Flaming Gorge Dam, sixty miles upstream. The Yampa, in contrast, is the last unregulated river in the entire Colorado River system. It slips into the monument from the east, flowing wild and muddy for several weeks in the spring. Where Lodore Canyon is steep and dark, Yampa Canyon’s walls are a bright blend of orange, purple, gray, and red, giving way to glowing white sandstone in sections.

Situated on the northern edge of the Colorado Plateau, Dinosaur National Monument encompasses a diverse range of ecosystems. From the 9,000-foot Zenobia Peak to the river corridor 4,000 feet below, Dinosaur is home to ponderosa pines and aspen trees, juniper and sagebrush, greasewood and shadscale, and lush riparian vegetation such as box elder trees and willows. Black bears, mountain lions, mule deer, bighorn sheep, elk, and moose roam from the mountains to the rivers. Lizards, snakes, ringtail cats, and prairie dogs inhabit the lower elevations. Peregrine falcons, eagles, and songbirds are frequently spotted, and the rivers teem with fish; many are introduced trout and bass, but three endangered native species still cling to existence. The Colorado pikeminnow in particular owes its continued survival to the unregulated flows of the Yampa. 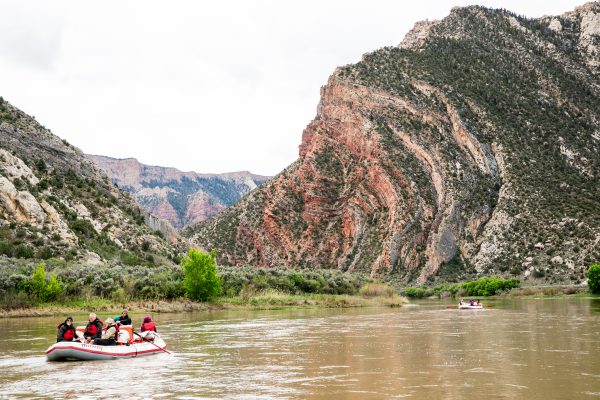 From above, the rocks of Dinosaur National Monument are a kaleidoscope of rainbow-colored ridgelines, uplifts, white cliffs, and curved canyons. Geology is on display in a level of detail that is both fascinating and baffling. Visitors can travel along the paved road to the Harper’s Corner overlook, and peer down the jutting spines of the Mitten Park Fault, or drive just beyond the Quarry Visitor’s Center to the edge of the steep Split Mountain Anticline, or float through the Gates of Lodore into cliffs of billion-year-old quartzite. The dinosaur bones represent only one example of life preserved in the monument’s rocks. Limestone along the river corridor includes fossil evidence of much smaller but superabundant life under oceans that once covered the region.

Long before Douglass started digging for dinosaurs, the land within and surrounding today’s monument was home to the Fremont people. The Fremont were hunter-gatherers who carved and painted images on the rocks 700–1300 years ago. Later, Ute, Comanche, and Shoshone tribal groups took advantage of the land that was rich in timber and game. Mountain men and fur trappers began to move into the region in the 1830s, even traveling the river corridor in round boats made of bison hide stretched over wooden frames. Beginning in the 1860s and 70s homesteaders grazed sheep and cattle and occasionally helped to shelter outlaws such as Butch Cassidy and the Wild Bunch. John Wesley Powell literally put the region on the map in 1869 as the leader of the first expedition to travel and map the entire length of the Green River from Wyoming to the Grand Canyon. 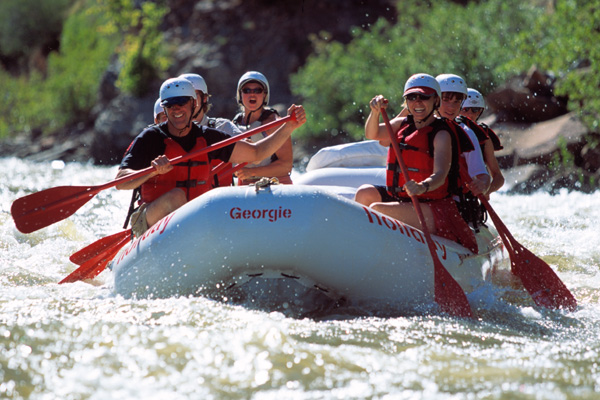 The inclusion of the Green and Yampa rivers in the monument in 1938 created new business and recreational opportunities. Vernal local Bus Hatch had been running exploratory trips on the Green River since the early 20s; he established the first commercial river running company in the United States in 1929, Hatch Expeditions.

The monument remained largely unknown, however, until the mid-fifties, when the Bureau of Reclamation proposed building a dam just below the confluence of the Green and the Yampa. The two rivers meet in Echo Park, at the center of the monument, where the rivers whisper along the base of Steamboat Rock, a white stone monolith where peregrine falcons nest. The dam would have flooded Echo Park as well as the entire length of Lodore and Yampa canyons as part of a water storage and energy generating scheme. The resulting battle led to Congress removing the Echo Park Dam from their water storage bill. It also marked the birth of the U.S. environmental movement and set the precedent of not allowing development within the boundaries of a national park or monument.

Downstream of Echo Park, the Green River (now also bearing the water of the Yampa) flows through another series of canyons, each with its own geologic puzzle until it emerges into the open agricultural land of the Uinta Basin and out of the monument. Most river trips end here. But the road from the boat ramp climbs back up into the dry, bony hills where the story began. And if you haven’t seen the dinosaurs yet, you owe it to your eight-year-old self to stop. Earl Douglass’s Wall of Bones is waiting for you.