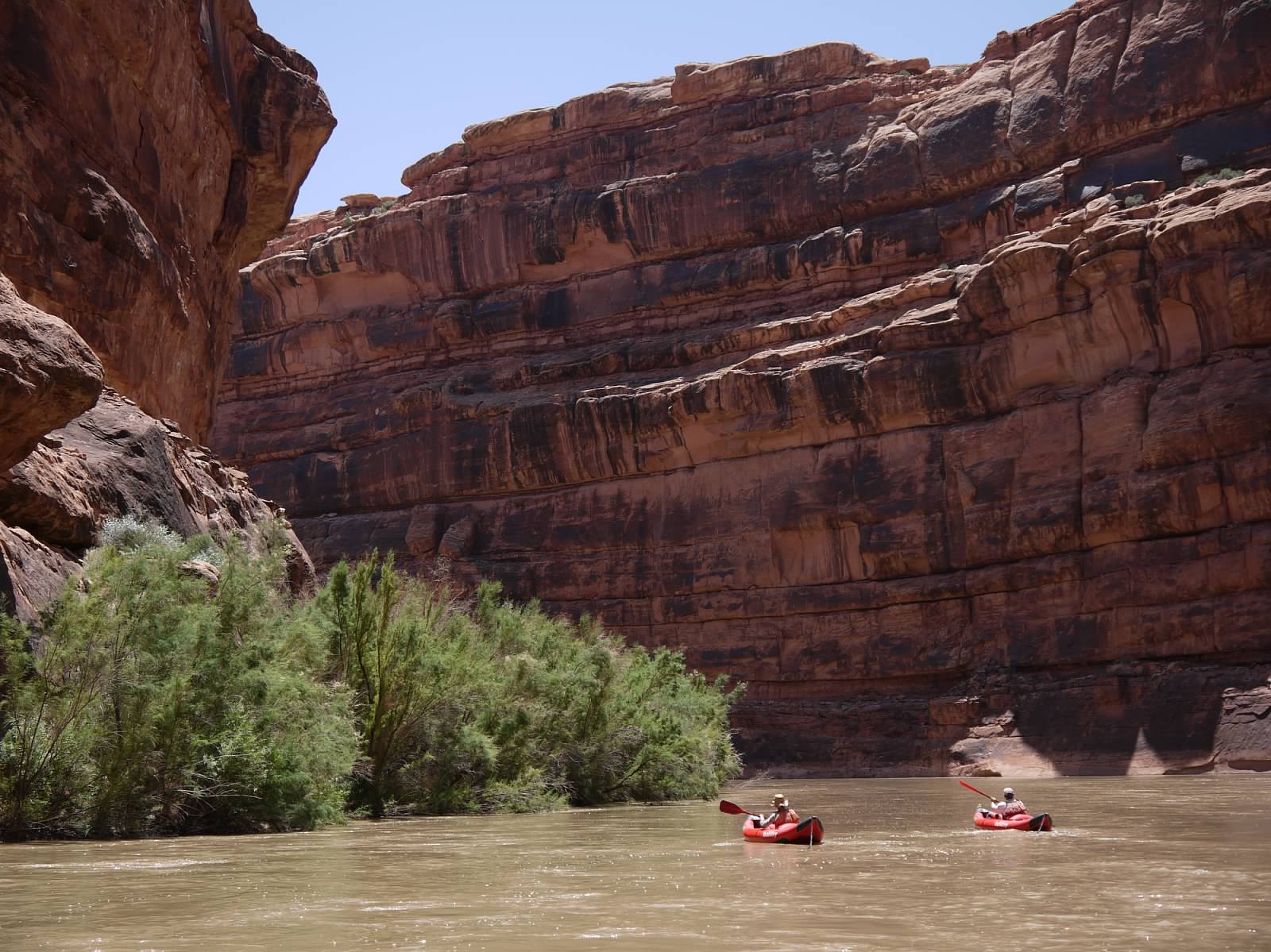 When you float down the Yampa River you’re being carried on one of the West’s last wholly wild rivers. Try as the developers might, the Yampa remains undammed — the last of its kind in the entire Colorado drainage. So I mean Wild as in dinosaurs. Wild as in tigers.

Dinosaur National Monument hides a particular treasure from all except those who run the Yampa: Tiger Wall. Tiger Wall is 200 feet high, and has stripes. 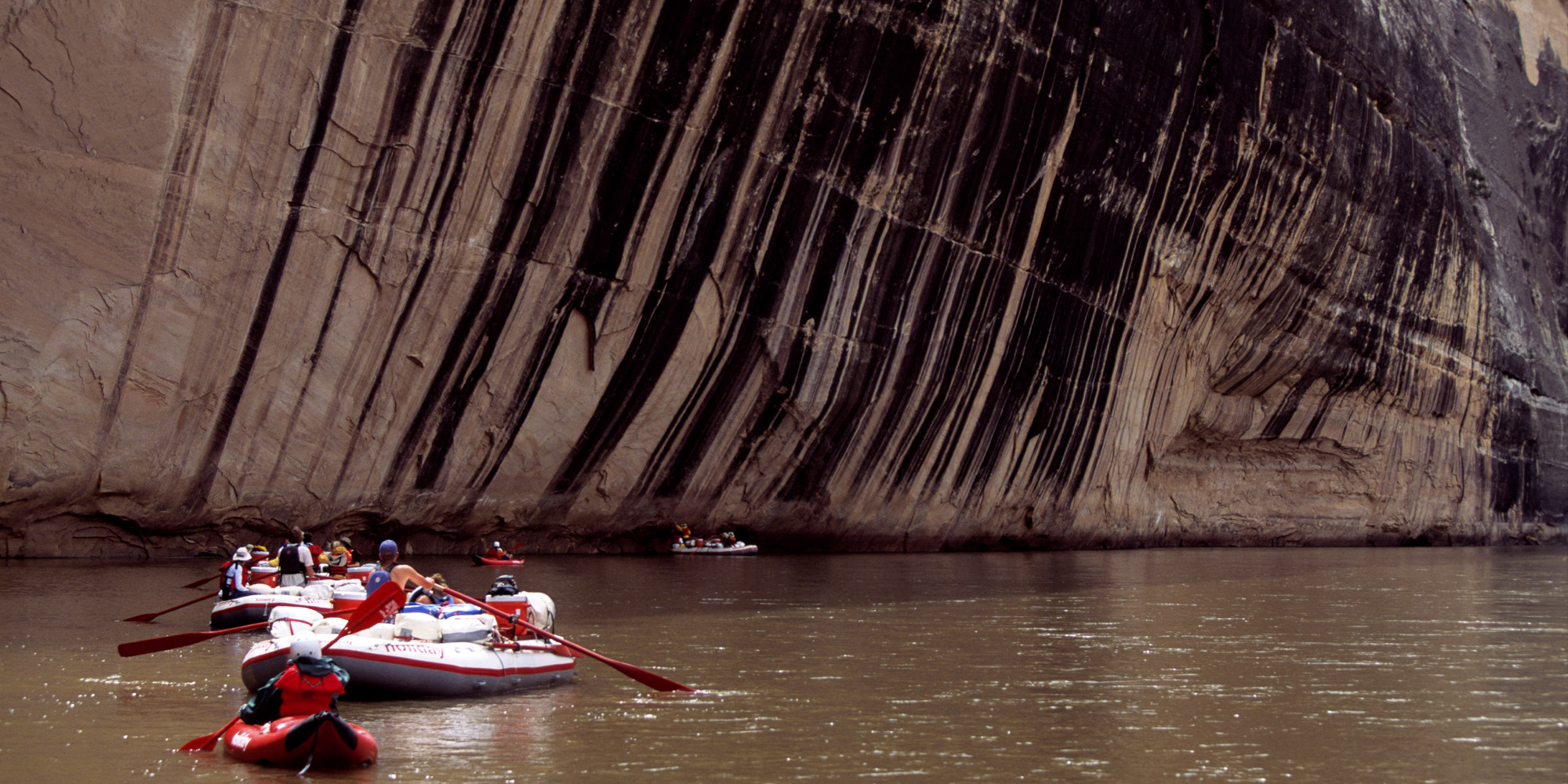 You crane your head back to take in that canyon expanse. Feel the bright, banded rock, like some beast brooding over you. Your guide brings the raft close and instructs someone in the boat to stand up and kiss the canyon for good luck. You’ll want luck: a few miles downstream is Warm Springs Rapid, one of the ten biggest drops in the country (incidentally, this rapid was a name-maker for Holiday River founder Dee Holladay, who was one of the first to successfully run this rapid the day it was formed by a massive flash flood in 1965).

But whether the good-luck superstition stands, there’s a reason to think these stripes are something special — and well-deserving of a smooch.

The dark lines on the wall are desert varnish, and you’ll see boulders and canyons gleaming with it on all of our rafting and biking trips through Canyonlands. Though the varnish isn’t always arrayed in formation fit for a jungle-cat, it is always a wonder. The patterns of this canyonlands shellac can help you piece together which fallen boulders were once part of the canyon walls. It’s the medium of petroglyphs — the chiaroscuro canvas for the skilled artists who have inhabited these deserts for millennia. 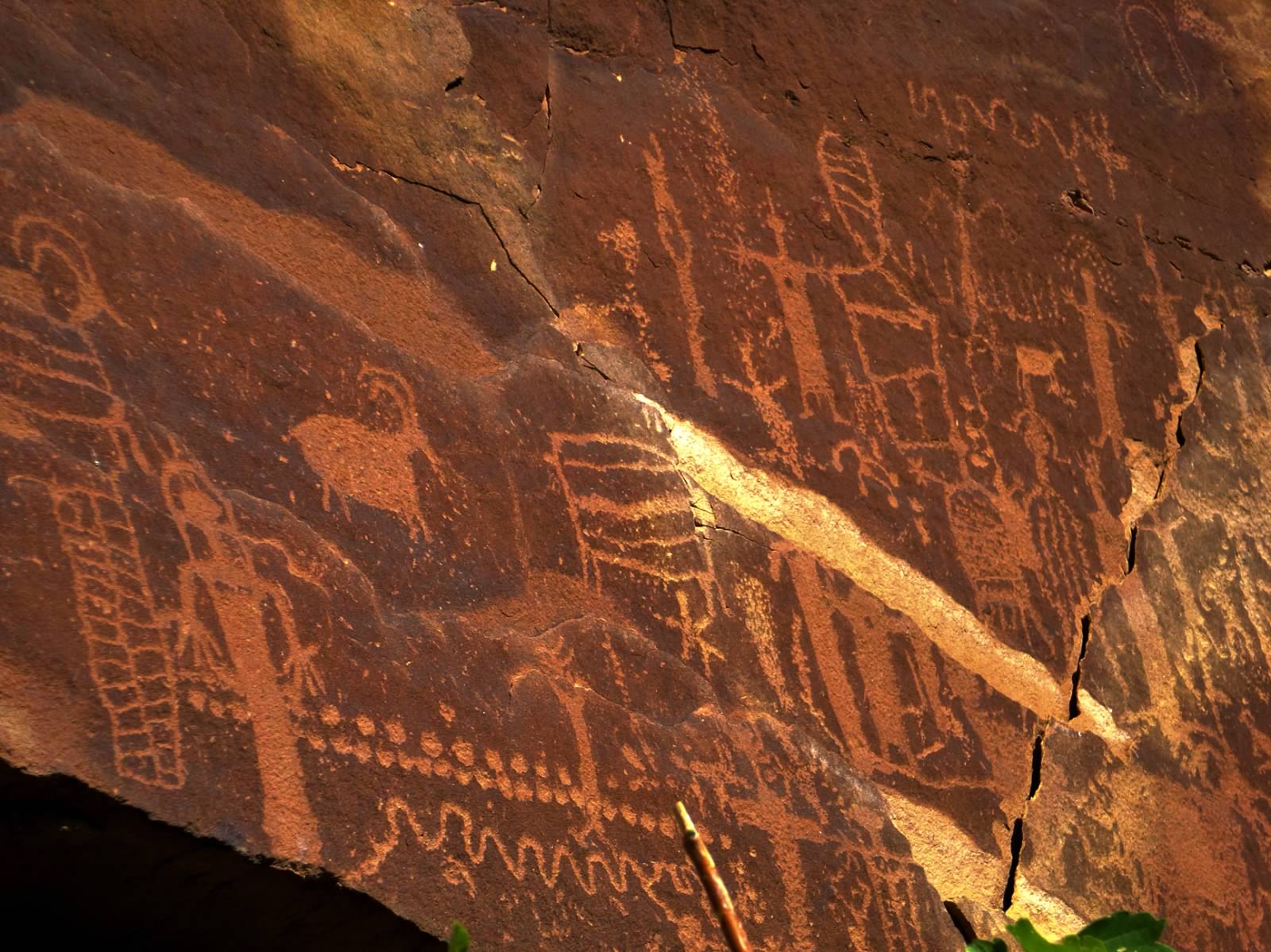 And the deeper you explore desert varnish, the stranger the story grows. Its origin remains a scientific mystery. At first it seemed the arid heat cajoled materials from deep in the rock out to the surface — but then evidence emerged that the material slowly builds through wind-borne clay deposits.

All the manganese which gives it its dark color (50 times more abundant in the varnish than in the underlying rock) speaks to the final oddity in varnish formation: likely it relies on ancient colonies of manganese-breathing microbes. These colonies could have been the first organisms to brave life out of the oceans, creeping out to the harsh, dry rock. Our best guess is these bacteria (with some algae and fungus) build the layers of varnish at an agonizingly slow pace — taking thousands of years to fix the thinnest coat on the rock.

If it’s not strange enough to imagine wall-dwellers who breathe and eat manganese, some scientists think this patina could hold something even more peculiar. This is because, despite all our tools and our best efforts, we’ve never been able to grow one particle of desert varnish in a lab. The entire process eludes us. And so some propose that the desert walls are home to a ‘Shadow Biosphere’ — a realm of microbes who live in ways that are radically different from our own old non-shadowy, DNA-toting selves.

Extreme spaces which can’t host much ‘regular’ life — like the bare rock of Western deserts — are precisely the kind of places scientists expect to see shadow biospheres, if they exist. Could the dark surfaces of the desert be fashioned by ‘Weird Life’ — creatures we can’t even recognize as alive because their very biochemical composition is too fundamentally different from our own? In David Toomey’s book on the subject, he says shadow biospheres are “like the realm of fairies and elves just beyond the hedgerow.”

As soon as we begin reimagining the very basics of being-alive, our vision expands out of the canyons and clear off the planet. Research on desert varnish is tied into the search for life on Mars, where the rocks show similar patterns.

So while there’s no tigers on Tiger Wall, there is life there, and a mystery. Once again we learn from the desert that Life can thrive in the most surprising of places — and make its harsh world more beautiful for having been there.

It almost makes you want to kiss a canyon.