Debunking the Myth of Dams as Renewable Energy 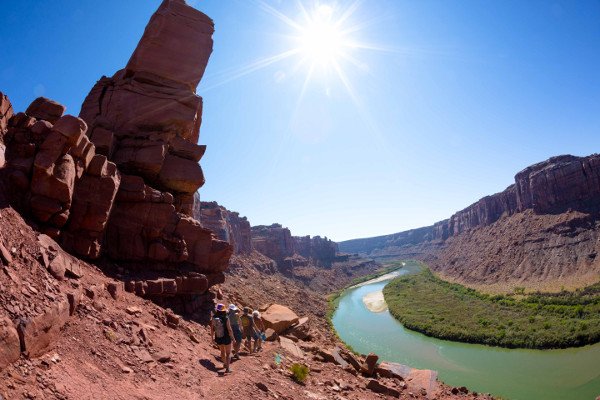 Dam’s have long received the ire of environmentalists. Some of the Sierra Club’s first high-profile fights were against major damming projects. Edward Abbey wrote famously of Hayduke’s campaign to bring down the Glen Canyon Dam. Rebecca Solnit recently took aim at that same dam in a piece called “Letter from a Drowned Canyon.” But, these voices have been consistently outweighed or ignored by the powers that be in this country. As one historian puts it in the movie Damnation, “I don’t think FDR ever saw a dam he didn’t think should be built.”

And build them we have. There are an estimated 84,000 in the United States. That includes the giants like Glen Canyon, Hoover, and Oroville, but also many smaller dams on rivers like Utah’s Bear River. These smaller dams are often built under the auspices of water retention and hydroelectric generation, twin needs of our ever-expanding cities and suburbs. In many cases, dams are assumed to be the only possible solutions for municipal water needs and as ‘green’ alternatives to coal fired power plants. Recent proposals for a Bear River Development Project include up to seven dams to bring more water to an ever-expanding Salt Lake City metro area.

However, the Utah Rivers Council has opposed the project because of its multiple, horrendous environmental consequences. They have encouraged alternative ways of sourcing water, including removing property tax subsidies that encourage waste and converting surplus agricultural water for municipal use. As for the hydroelectric potential of development on the Bear River: a recent Salt Lake Tribune article reports that Rocky Mountain Power is now throwing their hat into the project, with a “very preliminary plan for boosting storage at five existing dams that could provide northern Utah customers with enough water to meet their projected needs well into the future.” But this plan is suspect, given that Rocky Mountain Power has been grasping for a shot at relicensing their Cutler Dam project, which has been operating at about 30% generating capacity.

This is one of the little known facts about hydroelectric dams: they are not usually operating at full capacity. As the all-things-river expert John Weisheit has written: “in early 2005, the efficiency of the power plant at Glen Canyon Dam was 60% of normal, which is about as efficient as a junkyard pick-up truck.”

When reservoirs are too low, it becomes less economically viable to generate electricity. What’s more, silt and sediment build up on the backside of dams and in the tributaries. This means a loss of storage capacity, and erosion and cracking to the electricity producing turbines, not to mention an environmental catastrophe. Yet, perhaps the most overlooked issue with dams, even for environmentalists, is their direct contribution to greenhouse gas emissions.

The International Rivers Network estimated in 2007 that “the world’s large dams emit 104 million metric tonnes of methane annually from reservoir surfaces, turbines, spillways, and rivers downstream. This implies that dam methane emissions are responsible for at least 4% of the total warming impact of human activities.” The methane comes from organic matter that has been flooded by the reservoir and that flows into it from the river behind. Sitting in stagnant water, this material rots, releasing methane which floats up to the water’s surface or is released at the dam’s outlets.

Ironically, for all of their destruction and methane release, hydroelectric dams don’t actually generate that much electricity compared to fossil fuels. As Weisheit points out, “the coal-burning Navajo Generating Station near Lake Powell will produce more electricity annually than all the hydropower facilities on the Colorado River combined.”

I’m obviously not arguing for the utility of coal as an electricity source. But it’s worth crunching these numbers when dams are presented as the ‘clean’ alternative to fossil fuels. Dam proponents like to say that hydroelectric projects are the cleanest energy sources we have while ignoring (or ‘externalizing’) the impact of flooding, methane release, construction, and river degradation. Every time we block and reroute water for our own needs, we are causing harm all the way up and down the river. It’s not clean to flood a canyon, and it’s not green to cut off historic migration routes for fish. It’s certainly not environmentally friendly to dry up the Great Salt Lake.

The only way to make a river into a renewable resource is to tear down its dams.