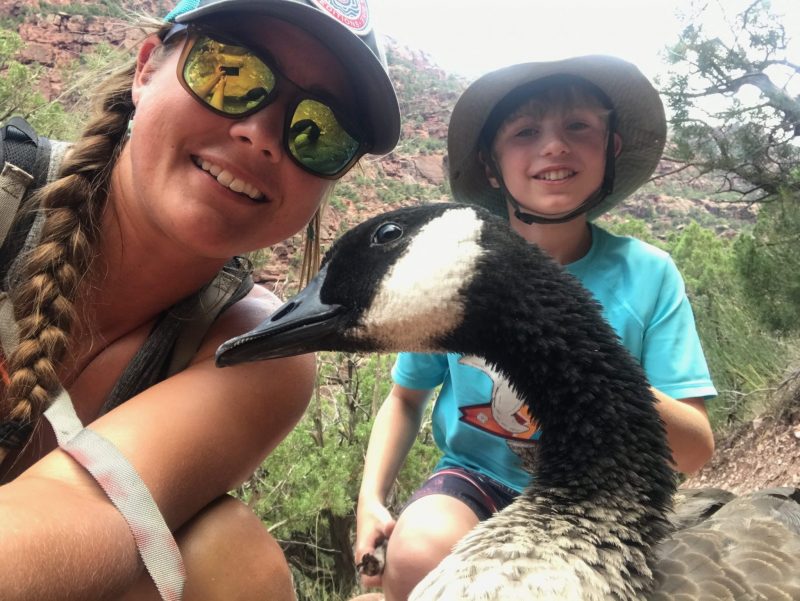 Holiday guides are used to looking behind them after passing through some rapids to see how well the next crew gets through the rough water. They are used to having a few eager guests in toe as they rig up the boat and wander through hidden red rock canyons. Guides expect to spend their river trips in the constant company of others (one job requirement: be a people person!). So, it was not much of a surprise when one of our guides looked behind her on a recent trip to see someone following her. She just didn’t expect that someone to be a goose.

The goose became part of the expedition down Lodore canyon and was lovingly named “George”***. He waddled behind his companions on a hike, at the campsites, and even floated along beside them in the water. He slept on the guides pads (and also defecated on them…). He faced the rapids. Seriously, watch the video. By the end of the week, George was a beloved member of the crew. 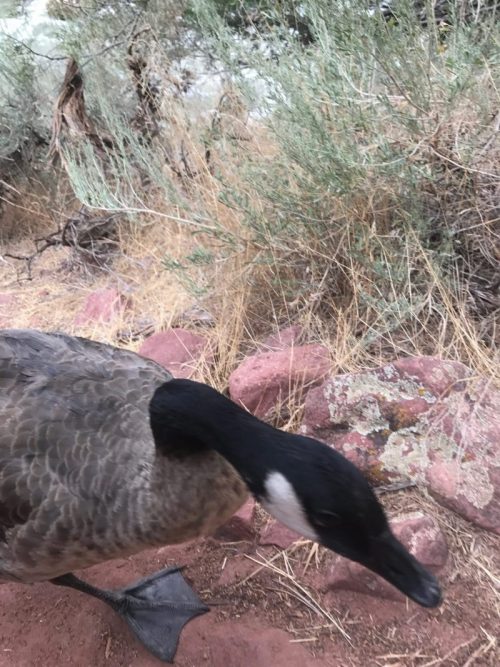 While it’s not abnormal to see a Canada goose around the Green River, it’s rare to have one be so interested in humans. And it’s also rare to see one in the middle of summer. Normally, the geese, who come south from Canada during the winter, fly back north in the warmer months. But recently guides have noticed that the birds are in the canyons all summer long.

But it’s not just the canyons. It’s the public parks, the golf courses, the playgrounds. Canada geese have been sticking around their southern range during the summer rather than migrating back north to their normal breeding grounds. These birds that don’t leave are dubbed ‘resident’ geese. Perhaps that is why the goose in Lodore Canyon teamed up with our Holiday crew. Perhaps now that he is a resident, he just wanted to get to know his new neighbors. Well, Holiday is happy to get to know the new residents, especially if they are all veteran rapid navigators like the last goose we met.

But there are others out there who are not so happy to have these new residents around. People in the city of Denver have been dealing with unprecedented amounts of goose droppings in their public parks. Posh golf courses all across the region see the birds as pests. Scientists are worried about their impact on various ecosystems. So, why is this happening?

It’s hard to say with certainty why the Canada geese are not returning north in summer. But it certainly has something to do with human interference. Officials in Denver are urging residents not to feed the geese. Others point to the human-made oases, like golf courses, that are a perfect year-round habitat for the geese. Some point out that the boom in goose populations was actually a human-sponsored affair in the first place.

In the early 20th century, overhunting and habitat loss nearly wiped out the entire Canada goose population. In fact, the entire ‘giant’ Canada goose subspecies was thought to be extinct until one small flock was discovered in 1962. Then began a concerted effort to revive the geese. A program of breeding and releasing the geese into the Northern midwest was begun in earnest. Game laws were changed to protect the birds and their habitats. 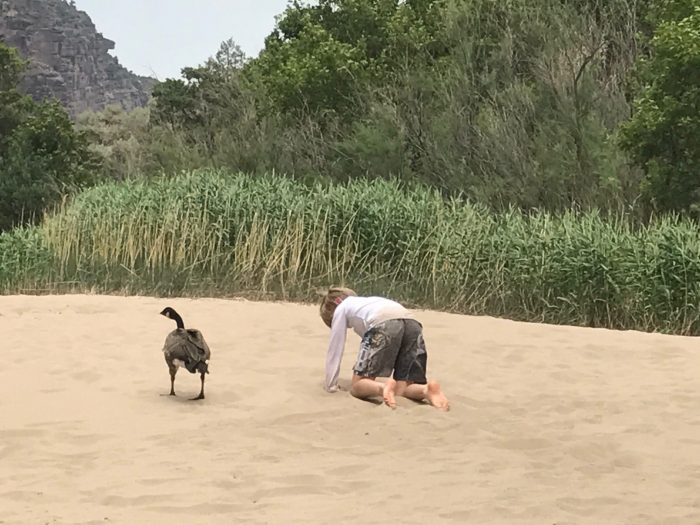 The program was successful. Perhaps too successful. Now conservation efforts revolve around controlling the birds, rather than breeding them. In Utah, the Division of Wildlife Resources actually transports the geese from urban areas to underdeveloped release sites, like the Great Salt Lake. They mark the birds with bands and try to track their movements. The hope is that they will migrate back north, and next year return to the wild area rather than the park or golf course. It seems like grueling work, but as this article by DWR employees says, it can also be fun.

Another way that the state is combating rising resident geese populations is to loosen hunting regulations and lengthen the season. The waterfowl season just started in most of Utah. The Canada Goose, a ‘dark’ goose, has a long season this year. It will go through January 2018 in all four of the state’s goose hunting areas.

While we at Holiday understand why some people are worried about the geese, we hope that we can find a way to co-exist. Maybe some folks from the DWR, some hunters, and some of the geese can come float the river together, talk it out over some drinks around the fire. We’ll even sponsor the goose. In fact, we’re willing to give one free trip to every new resident goose, as long as they are as well behaved as our previous avian guest.

***George the goose was not touched/ played with/ harmed or fed during the course of his inexplicable voyage through Gates of Lodore with Holiday.