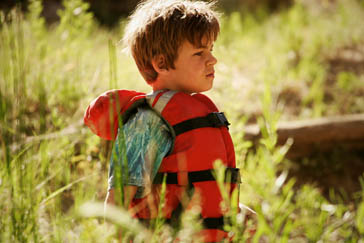 Late in the 19th century, Jim Moore came to Idaho to chase the dream of gold. He ended up staying for a new dream of self-sufficiency along the generous banks of the Salmon River, where he led a simple, solitary life for over 40 years. Despite his quiet ways, he was known as a friendly man who did not shy away from others but welcomed them to see his lifestyle in one of the deepest river cuts on the continent.

In 1898, gold fever still gripped people, especially those who sought to create a new life for themselves. By his own account having fled an abusive adoptive father while still young, Moore eventually left his native Kentucky in search of a more welcoming place to call his own. Around the age of 30, he followed the siren call of gold with a placer mine claim along the banks of the Salmon River. At the time, the Forest Homestead Act declared no one who only held a mining claim could denude the forest land in a wasteful manner. So for each tree Moore chopped down, he eventually built himself a cornucopia of buildings that survive to this day. His structures were so well-made they remain sturdy over a century after being first erected. The National Register of Historic Places protects these buildings today, and you can see them on a Main Salmon River rafting trip.

Moore did indeed search for gold during the 40-plus years he called the Salmon River his home. He made at least 20 full trips down the river in his watercraft to sell items and keep an eye out for the always elusive gold in them thar hills. Sales of his whiskey, peach brandy, vegetables from his impressive garden, and beef to the miners and other travelers who came through the area brought in both money and socializing. The fruit trees Moore planted still bear fruit you can savor today.

Legend has it the enterprising Moore buried gold around his homestead. If true, the location of it remains unknown but very enticing to people who discover Moore’s history during an Idaho whitewater trip. Contemporary visitors may find themselves snared by gold fever when wandering through the remains of his buildings and gardens. Let your own imagination run wild as you hike the trail from Campbell’s Ferry to Jim Moore’s Place. Deep in the heart of the beautiful, remote Frank Church-River of No Return Wilderness and the amazing experience of river rafting the Main Fork of the Salmon River.