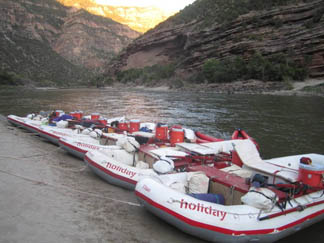 “Then the current caught us like some live thing. Faster and faster we moved. The rocks and bushes at the water’s edge began to fly by. I thought I heard something. It sounded like the rumble of thunder far back in the hills. It grew louder with every beat of my heart…

As far as I could see there was a stretch of spray and foam, short intervals of wild, racing water, then more spray and foam where it churned itself to whiteness against a mass of rocks. And from it all came a steady boom! boom!…

Sometimes the water shot over the top of partially submerged granite boulders, again it struck them with a force which made it boil and seethe. We sat, the bailer and I, in tense, strained silence and during that seven miles Guleke never lifted his eyes or relaxed the muscles of his set jaw, but steered with the grim sureness of knowledge and determination. The praises I had heard [of him] no longer seemed extravagant.”

Stories like this one about Captain Guleke made their way into the national press, including a 1921 trip recounted by author Eleanor “Cissy” Patterson that later appeared in the pages of Field and Stream magazine. A legend in his own time, Guleke apparently remained first and foremost a boatman, always ready and willing to introduce people to “his” river so they, too, could experience its wild presence. He helped create and shape Idaho river rafting into the commercially-guided fun it exists as today.

Married late in life to a widow whose husband had been lost to the river, Captain Guleke remained a boatman until he was nearly 80 years old. His gravestone in Salmon, Idaho, is inscribed with the words “River of No Return,” in fitting tribute to the man who made the Salmon River his quiet and abiding passion.