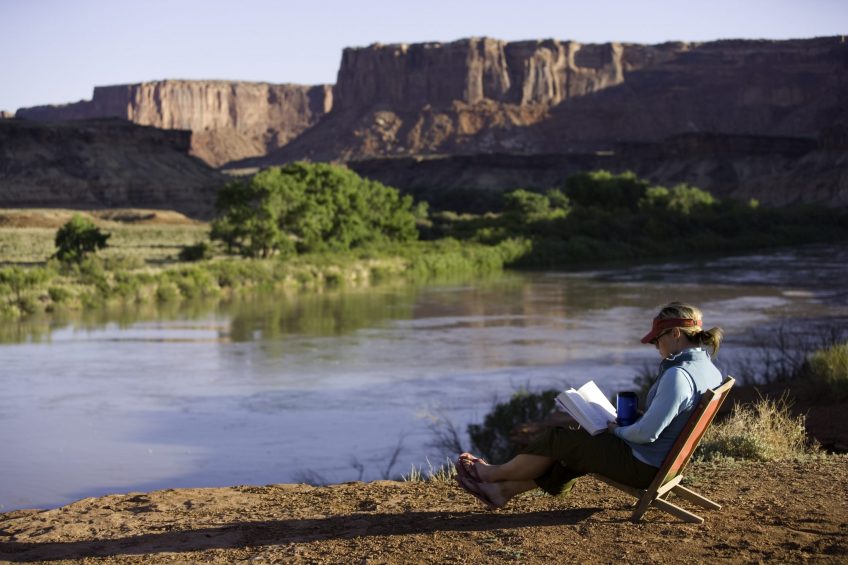 A classic is something that, even while staying the same, retains its relevance long after it was made. Marc Reisner’s 1986 book about water in the west, Cadillac Desert, fits this definition. The Colorado River on the other hand, does not. It’s too wily and assertive to be a classic; always changing its boundaries and flows. The Colorado retains its relevance through change, not stasis.

“Lake Powell is dying,” writes Rebecca Solnit, and “from its corpse the Colorado River is emerging.” This new Colorado needs new literature to match it. In the era of climate change, drought, and increased human development we need new stories and ideas to help guide our lives along this ever-changing river.

Here is a review of five recent books and essays that will challenge old frameworks, explore new problems, and make you fall in love with the Colorado River all over again.

Okay, Solnit hasn’t announced that her recent article in the California Sunday Magazine is just a tease for any sort of book about the same subject… but we sure hope it is.

In any case, her article gives us plenty to get excited about. The saga of a river dammed and a river reviving itself, where green life encroaches upon silt deposits, where the trash at the bottom of a reservoir mixes with buried archaeological sites. Solnit tells the story of a living landscape, a canyon “like a centipede: a 200-mile-long central canyon bending and twisting with a host of little canyons like legs on either side.”

Although Solnit is known in many circles as a social commentator, writing books like Men Explain Things to Me, and Hope in The Dark, she has also published multiple, powerful environmental works about the west. With her deep experience in the desert southwest, Solnit’s perspective on the Colorado River is both historical and cutting edge. How do we relate to the environments that we have disregarded and harmed in the past? How can we reconfigure our definitions of nature in the 21st century?

Read the article now, and keep your eyes peeled.

Solnit tells us of a river reviving in the shadow of Glen Canyon Dam. But why was the dam built in the first place, and what function does it serve now? Rebecca Solnit’s lyricism inspires questions, and Owen’s journalistic prose gives us answers.

Owen’s teaser article for the book explains the complex history and politics of a river that must “supply water to more than thirty-six million people in seven Western states, including residents of Denver, Boulder, Salt Lake City, Albuquerque, Las Vegas, Phoenix, Tucson, San Diego, and Los Angeles.” The book is like Cadillac Desert for a new generation, with fascinating and important insights into nearly every facet of water resource management in the west.

What, for example, is the effect of less development in the Colorado Watershed? Well, in one recent case it meant that the Southern Nevada Water Authority’s “revenues from connection fees had fallen by ninety percent,” which kept them from instituting water-saving policies. Counter-intuitively, “rapid population growth had been both the cause of and the solution to Las Vegas’s water challenges.” Confusing, huh? Well, thankfully, we have Owen to help us sort out the confusing jumble of laws and developments.

If you are still not scared after reading Owen’s book about our contemporary water management issues in the Colorado Basin, check out Bacigalupi’s depiction of what it might be like in the future. To sum it up: “Some people ha[ve] to bleed so other people [can] drink. Simple as that.”

And it is a rather simple story: a dystopian future, complete with resource wars, crime kingpins, dust storms, extreme inequality, and underdog heroes. It’s like Dune on planet earth or Mad Max with more politics. The Water Knife makes water scarcity fun, and a bit raunchy.

So you read The Water Knife and now you want something hopeful, you say. Then look no further. Water Is for Fighting Over seems grim until you read the subtitle: and Other Myths about Water in the West. Yes, the water wars are a myth. At least, that’s what Fleck wants us to believe.

This book is a retort, in a way, to the doomsday fantasies of Bacigalupi and nearly everyone else who has ever written about water issues in the west. While Fleck, a longtime environmentalist, recognizes that water scarcity in the desert is an issue, he also recognizes that humans have the profound ability to work together in times of crisis. Indeed, it’s the only way that we have made it this long in the Southwest.

Fleck reminds us that Las Vegas uses less water than it has been allocated, that local, state, and federal agencies have found ways to work on common ground before. While it’s surely not the only book you should read about water in the west, it’s a good addition to the library.

“The wonders of the Grand Canyon cannot be adequately represented in symbols of speech, nor by speech itself,” wrote John Wesley Powell. Well, Kevin Fedarko responds: challenge accepted. The Emerald Mile is a sweeping adventure story and an homage to that truly Grand Canyon.

“The Emerald Mile” is the name of the boat that carried Kenton Grua and his friends down the Colorado, from Lee’s Ferry to Lake Mead, in record time. It was 1983, and dangerous flooding had turned the river into even more of a wild animal than it normally is. The book is worth a read for the adrenaline rush alone.

But that’s not all there is. Before he could write the book, Fedarko had to run the river dozens of times to understand its personality, and his love for the river as it flows today shines through on every page. He even admitted in an interview that “the story of the speed run that’s at the heart of this book is honestly just a subversive excuse to indulge in an extended portrait of and a love letter to the dories, the river, and the Canyon itself.” The Emerald Mile reminds us that even as The Colorado, and the politics that surround it, are always in flux, human connection to it remains firm, rooted in our love of its speech-defying beauty, mystery, and wildness.