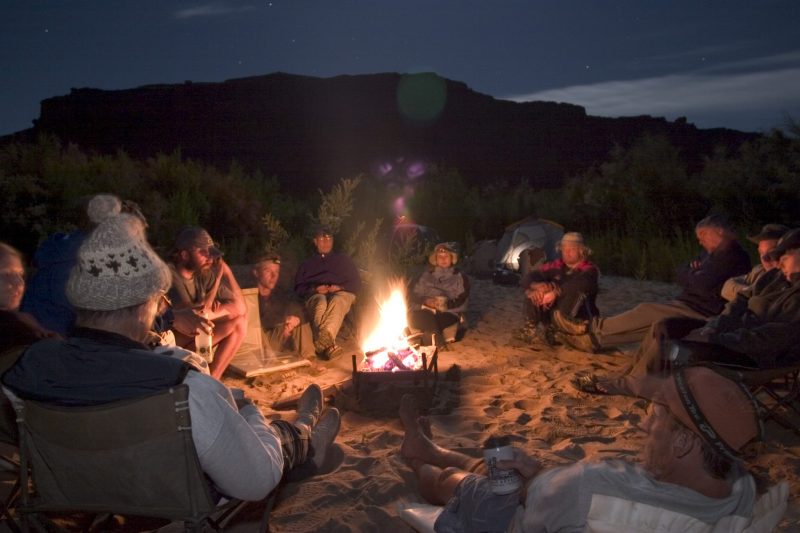 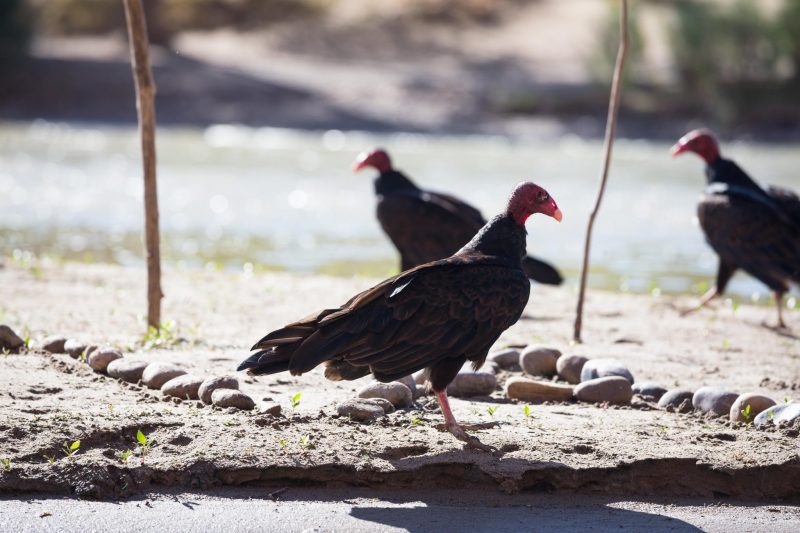 The Colorado River cuts through the Arid West like a vein, giving life to a parched region and offering all kinds of magnificent views and adventures to its residents. It’s an undeniably positive presence, soaked in sun and surrounded by brilliant red-rock cliffs, bighorn sheep, and rare desert greenery.

But the Colorado River has its more mysterious corners as well: canyons where the sun never penetrates to the ground, deep caves and loose cliffs, strange echoes that ring out in the night, and even a few shallow graves. This river has as many mysteries as it does miracles.

Here are some of the stories that your river guide might fail to mention as you pass through Westwater Canyon or descend into the more feisty rapids. They are the ones that are saved for the darkest of nights, when the fire is low, and only a few people are still awake. Read on, if you dare.

The Legend of Dead Horse Point 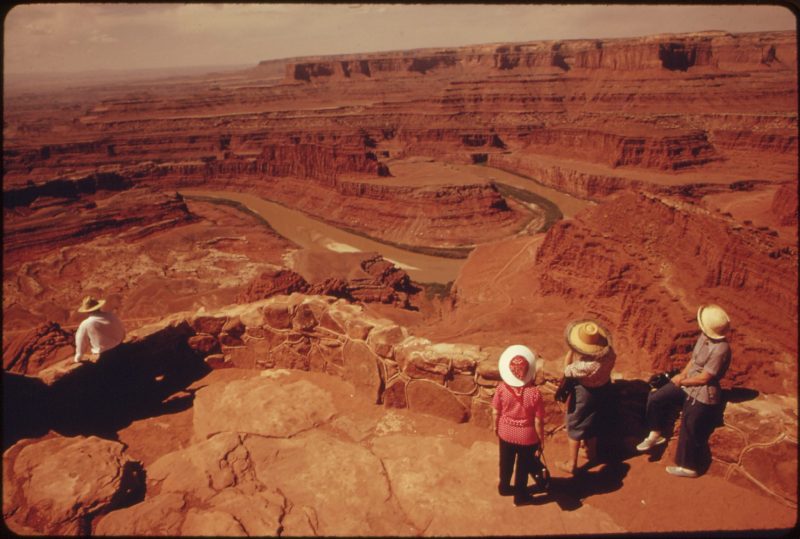 There are few cinematic moments that have terrified me more than this scene in the 2002 film, The Ring, where Rachel is on a ferry traveling to the island where a little girl was drowned in a well. A jet-black horse who is also traveling on the ferry gets spooked in Rachel’s presence, breaks free, and bolts off the side of the ship, killing itself in the churning ocean waters. We later learn that when the little girl died in the well, all of the horses on the island began running into the ocean to drown themselves.

This eerie story of an ocean and an island seems to have little in common with the beautiful, dry scenery of the Utah desert. But I can’t help thinking of it when I remember the legend that gives Dead Horse Point its grisly name.

Dead Horse Point is known as one of the most picturesque views in all of the Moab area. The overlook displays all of the glory of the red rock and the muddy water of the Colorado River that cuts through right through it. From the Point you can see millions of years of geological layers, deposited by ancient oceans, wind, and other forces of Mother Nature. The desert looks like an oasis from there, which makes it especially cruel that dozens of horses were trapped there to die of dehydration and starvation.

As the legend has it, cowboys used to utilize a small stip of the cliff as a natural coral for wild mustangs that they rounded up. The strip of rock was surrounded by sheer cliff on all sides, but for a small pathway which could be easily blocked by logs and brush. Well, one time, for an unknown reason, the ‘gate’ to this coral was left shut, and when the next cowboy came along, they found a horrific scene of decaying horses on the side of the majestic lookout.

This is one very plausible stories for the Point’s name, but we don’t really know. I have also heard whispers of another story, this one involving the ghost of a little girl who drowned in a well in Moab. . . But you’ll have to wait until we get around a campfire for me to tell that version of the legend.

The Davis Killings in Westwater 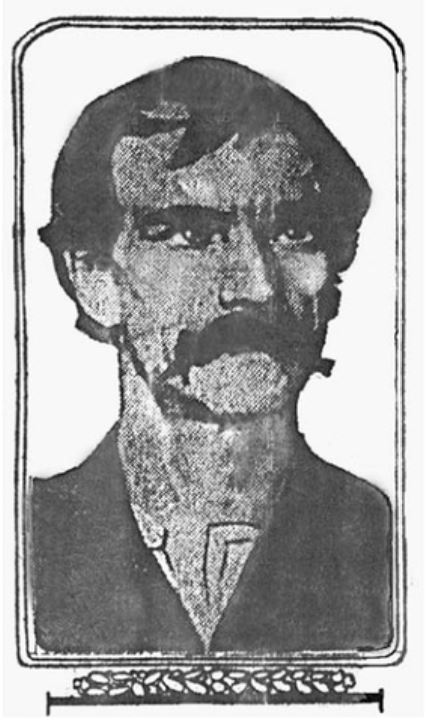 “For a very good reason I ran against Brock and his outfit at six o’clock this morning and as a result I want three plain cheap coffins soon as possible. W. E. Davis.”

That was the cryptic telegraph that Wilson Ellis Davis sent to his brother-in-law H.J. Henderson one morning in August, 1892. The men for whom the coffins were intended, Charles C. Brock and his two friends, Mueller and Dussel, were lying riddled with bullets just a miles down the shore of the Colorado River.

Davis’s “very good reason” for running against Brock and his so-called outfit had begun long before that August morning with a typical frontier-style dispute over cattle and honey. Davis, a former army captain, had several times suspected Brock, a German immigrant who worked as a river-runner in the area, of stealing his cattle, his farm tools, and of encroaching on his legally owned land. When something went missing, it wasn’t very hard to guess who it might be in the small town of Westwater, which sat on the river banks of the Colorado, just past the border into Utah. So, when Davis returned home from a short trip to find that some of his honey had been looted, he already had a suspect in mind.

Davis employed the help of another neighbor, George Grant, and the two of them followed a trail of spilled honey all the way to the Brock cabin, where they found him with two other men, Mueller and Dussel. After a little more investigation, the two men decided that they needed to confront the suspects with their own rugged form of frontier justice.

The two set off the next morning, packing a rifle, a revolver, and a lot of boiling blood. They found Dussel and Mueller at Brock’s shack, but not the man himself. Still, it didn’t take long for things to escalate. Davis ended up shooting Dussel, who was armed with just a club, outside of Brock’s cabin. Newspapers accounts of the subsequent trial explained the moment in gruesome detail. “The ball took effect in the cheek-bone, passing entirely through the head at the base of the brain” 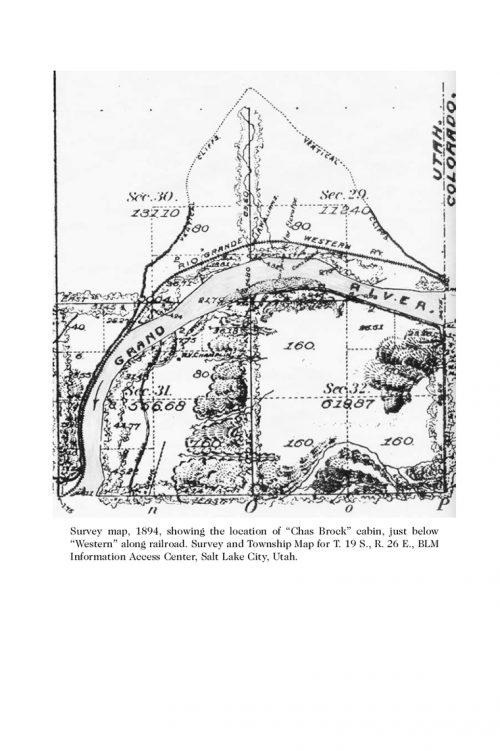 Davis then went into the cabin and shot Mueller, who was trying to return fire, “in the center of the forehead which reached and pulverized the skull.” After shooting the two men, Davis reportedly said to Grant, “My God! This is awful.”

When Grant asked Davis what he was going to do now, he reportedly answered that “he thought he had done enough, and was going home.” But, apparently, he had not done enough.

On their way home, Grant and Davis encountered Brock in a field. All three of the men were on horses. There would be several contentious trial accounts of this interaction, but one thing is clear: Brock had no weapon, and Davis shot him twice, killing him.

After killing all three men, Davis went home to report the killings and, apparently, to telegraph his brother for three cheap coffins. Davis would eventually stand trial for the killings, and he would be acquitted, the jury calling it “justifiable homicide.” But that wouldn’t be the end of Davis’s violent ramblings.

Davis would be tried for murder many years later, and found guilty, after his friend and roommate’s body was found butchered and their house burned to cover it up. Apparently, he committed the murder to obtain the man’s possessions using a forged will. After he was sentenced to prison for life, Davis’ possessions were searched and in them was found some pieces of missing evidence from the earlier Brock gang murders.

You can learn more about the Davis murders and other violent incidents between frontiersmen and outlaws in Westwater canyon in Mike Milligan’s book, Westwater Lost and Found. One thing that’s clear from this case is that Davis had a bloody streak, which means we have to wonder: how many more bodies are buried around the abandoned shacks of Westwater?

The Disappearance of Bessie and Glen Hyde 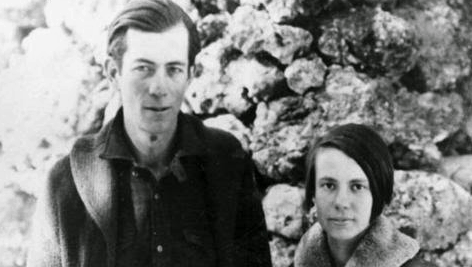 The final Colorado River ghost story that I have for you might be the creepiest one of all.

In 1928, two entrepid young adventurers, Bessie and Glen Hyde, decided to run the rapids of the Grand Canyon as a honeymoon trip. The two had run rivers before, but neither of them were professionals. While the young couple was lured to the Grand Canyon for the same reasons as everyone else, its mysterious, mile high cliffs and its ferociously fun white water rapids, they were also interested in claiming the title of being the first mixed-gender crew to boat down this section of the Colorado.

They set off from Green River on October 20, 1928, in a boat they’d constructed themselves. They were not seen again until November 18, when they hiked out below Hermit Rapid to resupply. There, they met photographer Emery Kolb, who snapped their photo and then sent them on their way to never be seen again (there are several interesting photos that have survived of the couple, some of which you can see here).

It would seem obvious that the couple succumbed to the dangerous rapids of the Colorado. They wouldn’t have been the first, nor the last. However, there is a good amount of evidence that suggests something else may have happened.

Bessie and Glen’s bodies were never recovered from the river, despite a long and arduous search. What searchers did find, however, was their boat, fully intact, with food and other provisions, disproving any suggestions that they’d succumbed to a wreck on a boulder or in the rapids. 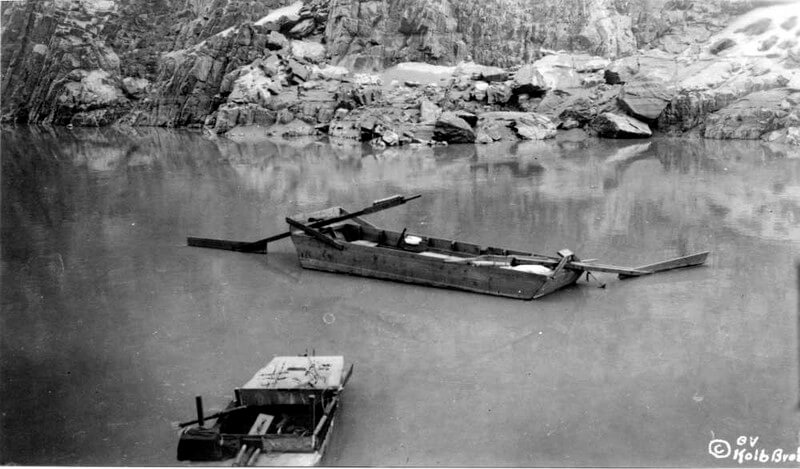 Some theorists suggest that it was Kolb, or some other traveler in the area, who secretly murdered the young couple for unknown reasons. When Emery Kolb died many years after the incident, a skeleton was recovered at his property with a bullet hole in the skull. For years, people thought that it was the body of Glen, a theory that forensic evidence would later disprove.

Another theory is that Glen died, but Bessie survived. Some even suggest that Bessie killed Glen for being an abusive husband, and then fled to live another life under an alias. This theory was bolstered by another wild discovery, this one involving a well known Colorado River personality: Georgie White.

White was a hero of the river. She was the first woman to run a commercial trip down the Grand Canyon, and she was famous (in some cases, infamous) for her prickly, eccentric personality. She was running down some of the biggest white water in the Colorado into her 70s, usually with a beer in hand. But it was after her death that her possible connection to the the Hyde’s would be revealed.

Among Georgie White’s personal possessions was a birth certificate that gave her first name as Bessie. Perhaps more mysteriously, she had a copy of the Hyde’s marriage license. Many were quick to note that Georgie might be the type of no-nonsense woman to murder an abusive husband and leave his body at the bottom of a canyon, and then go on to become a legendary river-runner.

But none of this speculation has enough proof behind it to stick, and I think that it might all just be a cover for an uncomfortable fact: we don’t know what became of Bessie and Glen Hyde, and that unsettles us. It leaves a question looming over the Colorado River: what if Bessie and Glen never left at all?