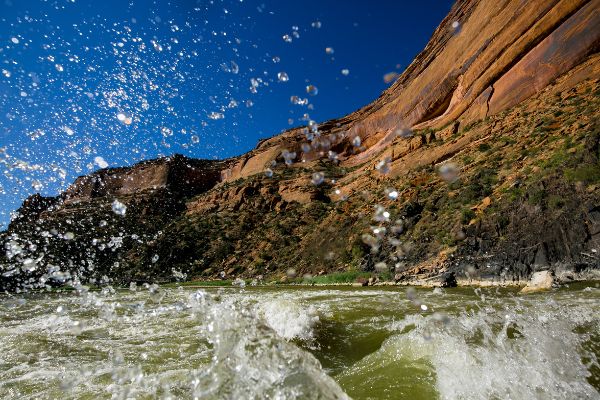 Agriculture in the Colorado River Basin

Driving through the rural Southwest in the summer, the vast, bright green fields of corn and alfalfa are distinct from the widely-spaced muted colors of native sagebrush and bunch grasses that characterize the undeveloped lands. Sun blares through torrents of water released by massive, slowly-rolling center pivot irrigation systems creeping across symmetrical rows of crops, water nourishing the growing seedlings. 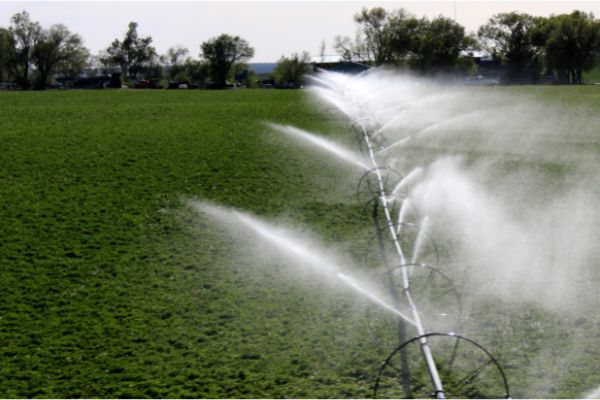 In the Colorado River Basin, 70-80% of the water is used for agriculture. Agriculture, a major economic industry and way of life, tends to conjure pictures of pastoral farms with a diverse array of vegetables and grain that feed the nation, providing fresh vegetables and stocking meat freezers. However, the reality of agriculture in the Colorado River Basin is a far more complex situation; a tangled web of industrial agriculture, global markets, federal subsidies, climate volatility, and stark water over-allocation. As water becomes significantly more scarce in the era of climate change, agriculture and water use will need to adapt in order to sustain this country in the future.

A story of climate change and over-allocation

Climate change and water development have drastically impacted the integrity of the Colorado River, reducing the amount of water in the river system by over  20% in the last few decades. The average flow of the river in the past 20 years is about 12.4 million acre-feet annually; despite the fact that 17.5 million acre-feet (an acre-foot is equivalent to roughly an acre covered in one foot of water) of water is allocated to seven states and Mexico.

Furthermore, it looks like the future will deliver closer to 11 million acre-feet as climate change worsens. While some of the 5-million-acre-foot-or-so gap was never developed (i.e., diverted for agriculture, municipal or industrial use), water shortages are becoming the norm rather than the exception. A top federal official with the Bureau of Reclamation stated that next year alone, the Colorado River Basin states will need to reduce water use by 2-4 million acre-feet — that is an unprecedented amount. To put that into context, Arizona’s entire Colorado River allocation is only 2.8 million acre-feet.

Almost all crops in the Colorado River Basin require irrigation or supplemental water, and agricultural water use and associated evaporative losses amount to between 8.5 and 11 million-acre feet of water per year. Water use is different in each state, but for example, in Colorado farmers use 89% of the available water. With agriculture being the largest water-using sector by far,  farmers, especially those with junior water rights, are first to see cuts to supply during years with low snowpack. 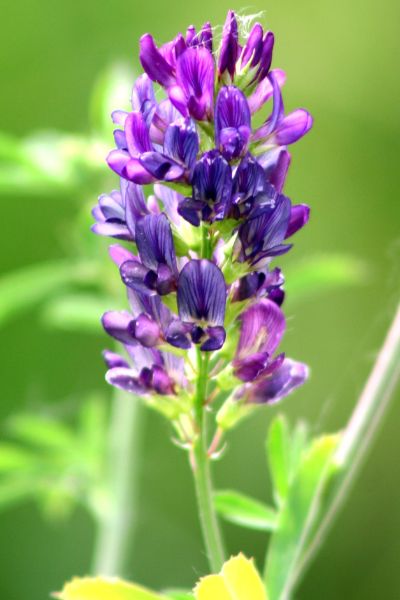 What crops are grown in the Colorado River Basin?

The Colorado River Basin is a vast landscape, spanning from the mountains of Wyoming down to the heat of southern California and Mexico, with crop varieties depending on their location in the watershed. The Upper Basin states of Colorado, Utah, Wyoming, and New Mexico grow primarily alfalfa and other forage crops, while the much warmer Lower Basin states of California, Arizona, and Nevada grow a greater diversity of crops, including nuts, fruits, and vegetables because of the much more temperate climate.

80% of the overall crops that dominate the pastures and fields of the Colorado River Basin states are grown for feeding livestock. Forage crops, like alfalfa, grow relatively quickly, so farmers can get multiple cuttings a year, leading to higher profits.

Most crops grown in the Colorado River Basin are extremely water-intensive. For example, cotton grown in Arizona uses six times as much water as lettuce, and 60% more than wheat. Another troubling antidote related to water-intensive crops is the pressure on both surface and groundwater. As surface water availability dwindles, particularly in Arizona, more pressure is placed on groundwater, which is not replenished as quickly as it is pumped and used.

There are some examples of adaptation – for example, the Ute Mountain Ute Tribe in southwest Colorado have reacted to extreme water shortages from the Dolores River to their Farm and Ranch Enterprise by growing specialized sunflowers in place of thirsty alfalfa, which takes less water and is nutrient-dense. It is important that when farmers need to pivot and change what they are growing, that a market to sell the new product exists – this is an area where state or federal governments could help connect farmers and producers.

As we live in an increasingly global economy, where goods are shipped overseas at rates never before seen, water that is the foundation of many goods is also exported in the form of cotton t-shirts and hay for dairy cattle. Robert Glennon, a University of Arizona Professor, told National Geographic in 2014 that it’s actually cheaper to send hay grown in California overseas to China in empty shipping containers than it is to send to other areas within the same state. About 50% of the alfalfa grown in California’s Imperial Valley (the largest individual water user in the whole Colorado River Basin) is exported internationally.

The United Arab Emirates is a major buyer of alfalfa grown in the U.S., and even owns land in Arizona where they grow and ship alfalfa back to the Middle East – exporting water and soil from the country. Recent reporting also uncovered that the United Arab Emirates also pays a shockingly low amount for water compared to other water users – which raises the question of how we’re using increasingly limited resources in this country.

The role of federal subsidies

In many cases, small and medium-sized farms are reliant on federal subsidies and crop insurance to make ends meet and to ensure that if something happens to their crops they won’t go bankrupt. The government heavily subsidizes commodity crops like alfalfa, corn, and soybeans, which again, largely feed cattle. The cattle industry, sometimes referred to as “big meat” has lobbied the government so this is the case, the government doesn’t readily subsidize other crops (such as vegetables) so there is less incentive to grow food that stays local. 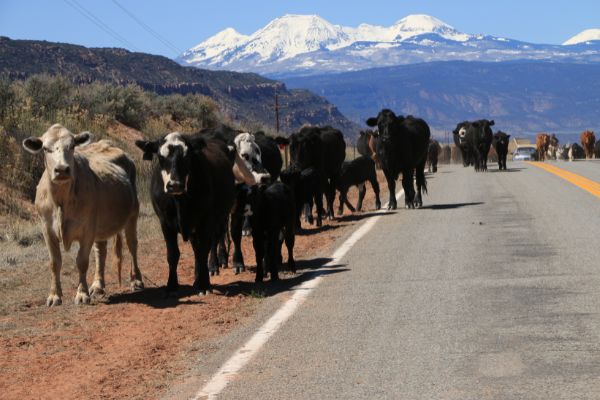 These subsidies, which are over 13 billion dollars annually, mean that the markets are flooded with commodity crops that are cheap for the meat industry to buy, and therefore increase their overall profits. These systems have greatly contributed to the vast reduction of crop diversity in the country, which has severe implications on small farms, climate resilience, and the ability to feed communities locally.

Crop insurance is critical for farmers, and when only certain crops are able to be insured, that drives what farmers grow. Crop insurance is also disproportionately given to farmers growing soybeans and corn, meaning that if a farmer wanted to grow more drought-resistant grain or vegetables, they may not be able to be insured — which understandably deters them from changing what crops they decide to grow.

In order to combat this, the public needs to pressure politicians to pass laws that stop favoring just commodity crops and actually encourage local, diverse food systems. When industries such as Big Meat have outsized influence on federal money, it leads to systems that support money and power, not feeding actual people.

Other companies also lobby for and benefit from federal subsidies. Monsanto is a massive company that sells genetically-modified seeds that require herbicides and pesticides to grow but promise a higher yield. These systems are terrible for crop diversity, soil health, human health, and water health – it’s all connected, right?

How can we make our food systems more resilient?

First, there is a persisting and troubling narrative that pits cities and farms against one another when it comes to water availability – and that is an unhelpful portrayal of the current situation that will likely not lead to ideal solutions. In reality, we all have to live with less water, and in many cases, more people. The question should be, how can small farms be economically viable and feed cities and rural communities? Cities will need to continue to reduce their water consumption by reusing water, installing low-water-use appliances, and removing all non-functional turf, but those water savings are a drop in the bucket compared to agriculture.

As the largest water user — by far —  Agriculture, too, must change. When insufficient water leads to perennial crops like alfalfa dying, rather than replacing it with the same crop, there must be resources to plant alternative grains or other crops that don’t cost more than the farmer can afford and are more resistant to drought. Federal subsidies need to incentivize keeping food local, and growing diverse crops that can withstand pests, floods, intense heat, and other unforeseen challenges. Furthermore, keeping more food locally can help reduce the carbon emissions associated with transportation and keep crops fresher and more nutrient-dense. 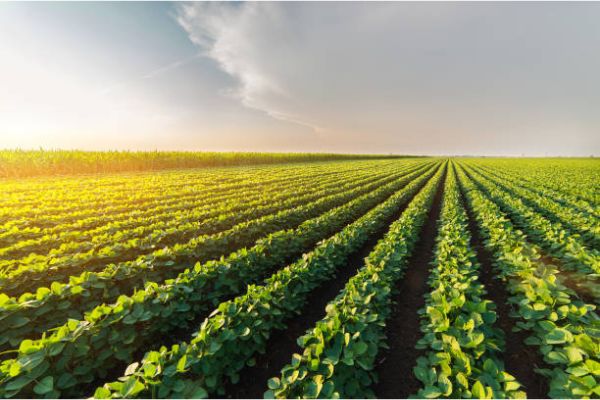 One solution that has been widely tested and discussed is the idea of paying farmers to follow, or not plant, certain fields during dry years. One wonky term for this kind of deal is “demand management,” and has had some success and quite a lot of criticism. Soil and crops do best with regular water, so when some fields don’t receive any, they may not be as productive in the following years. The problem is enough water just doesn’t exist, and for some, compensation is better than no profits at all. However, one major challenge with this can be tracking where the saved water goes – often someone downstream may use it instead.

Some agricultural producers scoff at the idea of changing crops, but in reality, food has been grown for thousands of years using alternative methods that don’t include GMOs, pesticides and hundreds of acres of the same crop in neat rows. Deserving of a whole book, there are time-tested methods of growing food that does not include modern-day, industrial agriculture. Indigenous peoples had — and still have — sophisticated food systems that work with the natural world rather than against it. Evidence of food gardens within forests can still be found today – diversity of plants, nuts, and other species that can be traced hundreds of years back to Indigenous peoples.

The thing is, most of the water in the Colorado River Basin is federally subsidized, to begin with — massive water storage projects were built that allowed farmers to have fairly consistent water and grow crops on a large scale. However, now that more water is being used than exists, and climate change is making it worse, farmers will need to be weaned from the excess water they are used to.

More tools should be implemented across agricultural sectors to better understand and curb water use. Additional and better quantification tools will help better understand where the water goes and how much is used, which can help farmers and water managers alike. Irrigation efficiency such as drip irrigation, lining ditches, and piping water can also help reduce the amount of water needed to grow crops. Ultimately, it is the farmers themselves that should be leading these conversations and have support from local communities and the federal government, but unfortunately, time is running out.

When it comes down to it, water is not a static entity, especially in the West. The same amount simply does not exist every year, and that needs to be reflected in how water is used. We all need to eat, but we also need a healthy planet and those two conversations should happen together. Farmers will need to adapt to use less water, not just to help the environment and maintain cities, but to save themselves. We are running out of time to come up with solutions, so the time to work as communities and with, rather than against — each other, is now.