Boundaries of The River 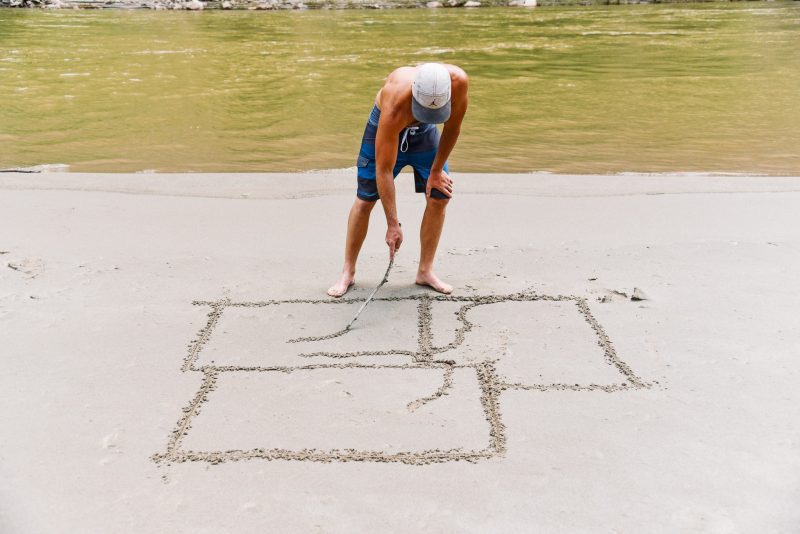 The Border that Wouldn’t Sit Still 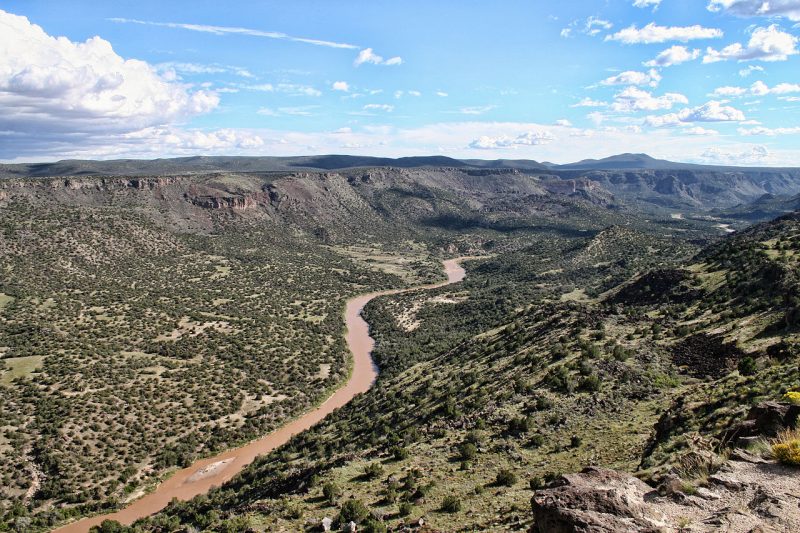 When negotiators from the United States and Mexico sat down to sign what would become known as the Treaty of Guadalupe Hidalgo on February 2, 1848, they decided that much of the border between the two countries should be determined by a river. Specifically, the Rio Grande River, which cuts through the Southwestern U.S. from Colorado to the Gulf of Mexico.

It turns out, the river had other plans.

Each spring, the rains would come and the Rio Grande would flood. When all of the waters receded, the landscape beneath the flood would have shifted just a tad. Or, in some cases, a lot.

Major floods like the one in 1864 changed the entire course of the river, partitioning land that used to be on the Mexican side to the United States side, and visa versa. Properties were lost, governments were unsure how to proceed, and tensions rose. In one case, the situation escalated into a decades long conflict, known as the Chamizal dispute.

The problem at the heart of the Chamizal dispute was this: the river didn’t sit still. It wanted nothing to do with the human world of static laws and nations. Just like the humans who have been migrating across the Rio Grande in both directions for millennia, the river understood that movement is sometimes essential. It was not going to allow itself to be a border.

An Ecological View of the Border Crisis 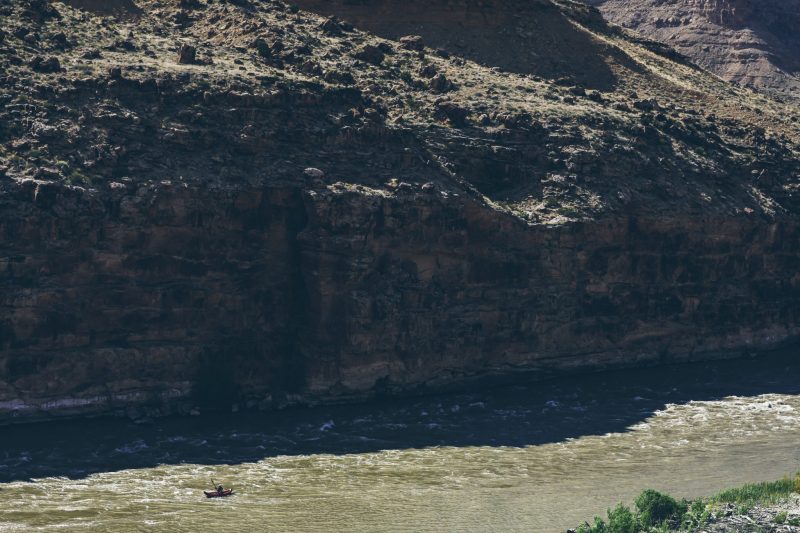 Desolation Canyon: a place split down the middle between federal and tribal land.

There are many lenses through which we could view the current human rights crisis at the U.S.-Mexico border. We could look at the economic and political conditions, for which the U.S. is often responsible, that has fueled northward migration. We could look at the issue as one of national identity, where a xenophobic minority in the U.S. wishes to exclude those who would come here speaking another language. Or, we could take a tip from the Rio Grande and look at the crisis from an ecological standpoint, one that steps outside of human systems and into another order altogether.

From this ecological perspective, what exactly is a border? In nature, there’s no such thing. The river changes course, the earth cracks, and the continents move, the mountains erupt. Even the most imposing cliffs are not really walls or boundaries; they support life and provide shelter. The range of plants and animals is never fixed like a border on a map, but always drifting with changing weather conditions, erosion, uplift, and other natural phenomena.

Go to the Sonoran desert and you will see that there is no clear line between where the saguaro cacti grow and where the palo verde trees grow. They overlap, they help each other out, and even far away from the saguaros forests, you will find the occasional, lone cactus who has ventured forth. In the Sonoran desert the only lines in the sand are those that we’ve drawn.

The desert herself doesn’t even have a boundary, and she cares not for the ones we place upon her. The Sonora has been expanding, in fact, for thousands of years. Ecologies simply don’t work if they remain static, a lesson that we should heed if we want to survive as a country and as a species. 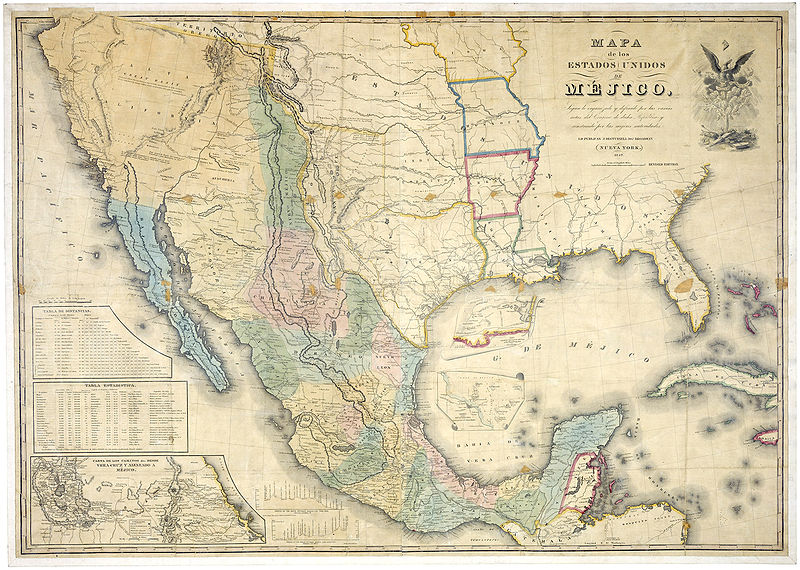 There have been some strange sightings in the Santa Rita Mountains of Southern Arizona recently. People say they’ve seen a giant cat, much like a tiger. Of course, this wouldn’t have been surprising to anyone 100 years ago, when the North American Jaguar roamed all over the southwestern portion of the continent. However, by the late 1900s, the jaguar was considered extinct in the United States, confined to Mexico and Central America.

But, apparently, much like the Rio Grande or the Sonoran Desert, the jaguar doesn’t much care for our borders. The big cat has come back to the “United States”, demonstrating something that we should already know from our own human history: borders are arbitrary.

When those war-weary negotiators were writing up the Treaty of Guadalupe decided to use the Rio Grande as the borderline between the U.S. and Mexico, they were using the ‘Disturnell Map’. This map had been carefully constructed to accurately represent all of the coasts, mountains, lakes, and rivers of North America. It was a masterpiece; a masterpiece of its time.

But time went on, as it always does. The world changed, and the map became obsolete. Those humans who relied too heavily on this arbitrary construction– the map –were surprised to find their expectations shattered when the Rio Grande moved, when the distances between geographic features were found to be different, when people continued to move across that area, despite what those thick-lined borders might say about where Mexico ends and the United States begins.

Like jaguars, humans tend to ignore borders in order to care for more important things: their families, their health, their culture. It’s strange, in fact, to expect anything else. Why would people whose ancestors have lived in Arizona for centuries cede their right to live there to a map created by bureaucrats? Why would people who are fleeing violence not naturally move towards safer ground? While it may be written off as naive, ecology shows us that at the foundation of all life is dynamism, change. Any border that would clog up the natural corridors that we use to survive and thrive is not only anti-life, but also destined to fail.

You Can’t Cage a River 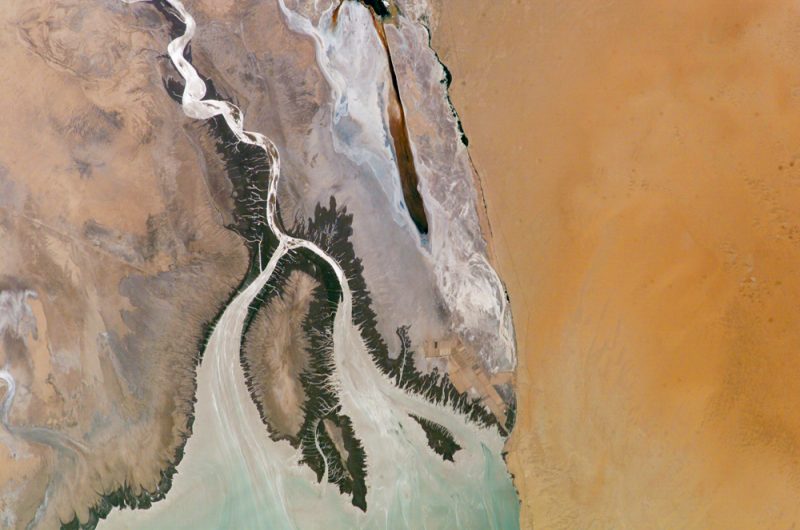 In 2009, the Arizona Game and Fish Department hired a trapper to capture ‘Macho B’, the only jaguar known to be living in the United States at the time. The cat was caught, caged, collared, and then released back into the wild. It died 12 days later. In the subsequent years, there would be an investigation into the incident resulting in multiple criminal charges. There’s a lesson here about what happens when we use cages to control wild and free things.

And it makes me wonder what lies ahead for the Rio Grande Rectification Project. The project was launched in 1933 to literally ‘straighten’ and ‘stabilize’ the 155-mile section of the Rio Grande that splits El Paso, the United States, and Juarez, Mexico. Upon completion, the river was shortened from 155 miles to just 85 miles. This is an enormous act of human engineering, and also an act of hubris. The river, just like the jaguar, cannot live a caged life.

Those of us who live, work, and play on rivers know this fact well. Flood years will change the composition of the river banks, swiping away anything humans have built there with ease. In fact, there is evidence of enormous historical floods, which if they returned today would easily wipe out marvels of human engineering, like the Glen Canyon Dam. It might take a few more years, but the jaguars will come back, the walls will crumble, the Rio Grande will change once again, reminding us that rivers aren’t subject to our borders.

It is only in the human imagination that borders exist, and so it is only in the human imagination that someone can be ‘illegal’. When we look on at the thousands of people who have walked, with babies in hand, who have ridden dangerous trains, who have risked death to come up to this strip of land we call the United States, we should remember that not so long ago we called this place Mexico, and before that it was known as the land of the O’odham, Apache, Janos, Mansos, Pueblos, Zuni and hundreds of other tribes. We should remember that when we cut ourselves off from each other, we lose all of the symbiotic relationships that make life possible, we block the change inherent in ecology. When we do that, it’s only a matter of time before the flood.

Sometimes We Have to Push the River 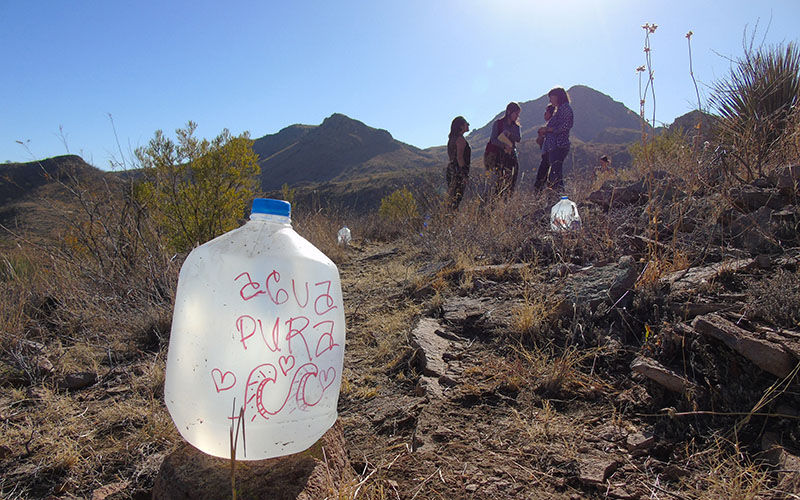 All of this talk of ecology is not to suggest that the right kind of change always comes ‘naturally’. In fact, the more an ecology is disrupted by humans, the more humans might have to do to push things back into alignment, like reintroducing wolves into Yellowstone, or tearing down a wall in the middle of a desert. Sometimes, we get to go with the flow. But sometimes, when a dam has turned that flow into a sickly trickle, we have to push.

Some ways that you can help push us back into a more just, loving, and free world is by getting involved with organizations that work along the U.S.-Mexico border. These organizations recognize that people who are fleeing violence, poverty, and hardship for a better life are not criminals. These groups are trying to minimize the harms done by our own draconian immigration laws, our militarized border forces, and our disastrous foreign policy in Latin America.

Pueblos Sin Fronteras: This group helps organize safe passage, human rights observers, and other services for the most marginalized and targeted migrants in the United States and Latin America. They could really use donations!

No More Deaths/No Mas Muertes: This is an Arizona-based group of volunteer humanitarian aid workers and activists who try to minimize the suffering of those crossing the border. They could use your donations and more volunteers!

The Border Angels: This group provides humanitarian aid to migrants on the Mexico-California border. Check them out!

San Diego Rapid Response Network: They are a coalition of human rights and service organizations, attorneys, and community leaders dedicated to aiding immigrants and their families in the San Diego border region.

La Red de Solidaridad: This is a Utah-based group that organizes to support families who are facing deportation and other immigration-related issues. They could always use donations and support from like-minded volunteers!