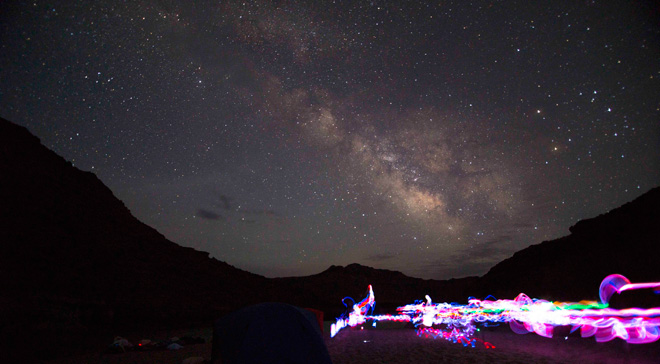 When was the last time you were in a place with absolutely no artificial light? Perhaps it was when you had to pull over on a long stretch of desert highway for an emergency pit stop. Or was it long before that, back in summer camp, when you played night tag with your friends? Maybe you’ve never been in a place where there wasn’t at least a street lamp blazing nearby, or a churning, industrial factory burning up the night in the distance.

Locate yourself on this map of light pollution. How many miles would you have to travel to get to a place where the light doesn’t touch? For almost all of us in the U.S., it’s at least 100 miles.

Another question: how many hours a day are you not only stuck under human-made light, but staring directly into an illuminated screen? For the average person, it’s an astonishing nine and a half hours a day.

“So what,” you might say, “I like the light.” Of course, so do we. As desert river-runners, we have to love the long, sunny days, and we know the value of a good red-light headlamp when you are trying to set up your tent in the middle of the night. But, all of this human-produced light is having some serious effects on our health.

Blue light and your circadian rhythm

Specifically, it’s the blue light that’s harming us. Blue light is high energy light that has a short wavelength, and when our eyes absorb it, it does all kinds of wonky things to our natural circadian rhythm.

Our circadian rhythm is not a simple melody that goes from on to off. It’s more like a whole jazz ensemble that takes cues from our environment to help it regulate a healthy flow for our sleeping and waking hours. One of the biggest cues that it takes is from sun.

During the day, blue light is actually essential to our health. It boosts attention, shortens our reaction times, and it helps boost our mood. But, when extended into the night, those same responses mean less sleep, and lower quality sleep.

But the long term health effects are much more serious than just waking up groggy. When your body is exposed to blue light, it produces less melatonin, which can lead to faster growth of tumors. Those who work at night are more likely to have diseases like diabetes. Sleep deprivation can lead to all kinds of serious issues like obesity, stroke, heart attack, and injuries like car wrecks. In short, staring at your computer screen can kill you if you aren’t careful.

If you still aren’t scared of blue light after these medical warnings, then perhaps the stars can convince you to seek out some darkness…

Sometimes you need the darkness to see the light

Okay, I don’t want to get too cliche on ya’ll, but it’s true! When you live in a city, you can usually read at night just using the light given off by nearby buildings. When you try to look into the night sky, you may see two or three of the biggest stars, if you’re lucky. Even those who live in more rural areas are plagued by serious light pollution.

This article has a neat grading system of 9 different categories of dark skies. It might seem like overkill, but getting far out of civilization, into a category 1 or 2 location on that scale, will really blow your mind.

When we run trips in Southern Utah we see plenty of red rock and wildlife spectacles worth writing home about, but it’s often the stars that are the most unexpected and remarkable thing that people see. And it’s not just the lack of light pollution that helps the stars to shine when we’re on our trips.

Our eyes were designed to see at night. So, when we don’t turn on an overhead light as soon as the sun goes down, they immediately start to adapt to the darkness. It only takes about 20-30 minutes for our eyes to adapt from complete sunlight to complete darkness. In that time, they become 10,000 to 1,000,000 times more sensitive to light!

That means that when you’re out on a river or bike trip, by the time the stars are visible, your eyes have really ramped up their seeing power. The Milky Way will look like a swath of magic dust, and the constellations will pop out like they are meant to.

Some tips for avoiding blue light

As I said above, blue light is actually good for you during the day. Especially the blue light that comes from the real, burning star that our earth orbits. It’s when it starts getting dark that you need to worry.

Better even than a blue light blocker: stay away from your screens altogether, especially two-three hours before you plan to fall asleep.

But by far the best way to get away from the pesky, ever present blue light of our modern civilization is to come join us on the river! Just remember not to shine your headlamp into your friend’s eyes or better yet only use it if it is in red-light mode. Possibly just turn it off, let your eyes adjust, look up to the wild sky, and contemplate how vast, complex, and beautiful this universe is!