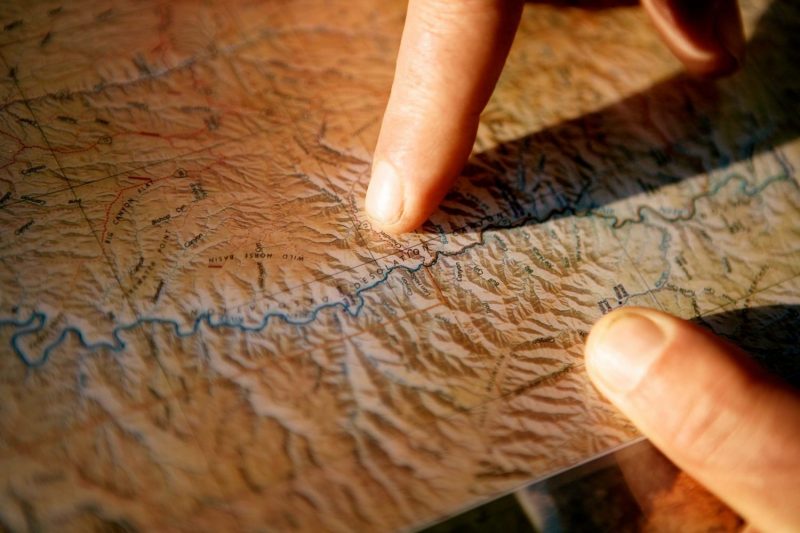 A Story of Extreme Energy Abstraction

There is a place for which I do not have a name. What a relief: to have no name in my mouth. With no name there can be no border, the place seeps into me as nameless feeling, and I carry it within my chest, exhale it into other places. Gasseus.

Names are condensations, our attempts to turn the gas into a liquid, maybe even a solid. They are the first step towards ownership, transaction. They abstract from the whole something so tiny that it can fit between our teeth.

This particular nameless place that I’m thinking of is a kink in the White River. Here, I’ll show you picture. 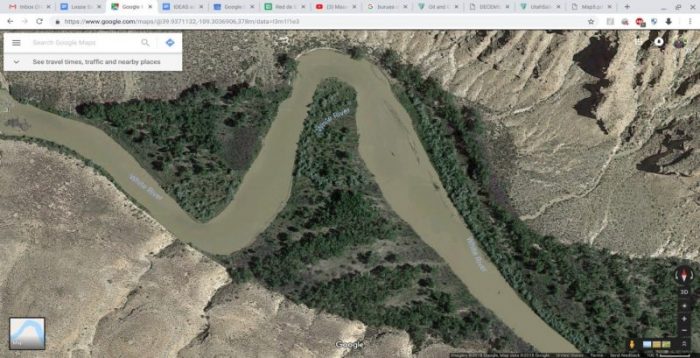 It’s true, this picture comes from a satellite, itself an abstraction (indeed, I am a writer, I peddle in abstractions). But even from this distance, I can imagine the smell of that slop-green water, the taste of dust and sage in the air. I can even see the little piles of chopped-up tamarisk piled along the bank, the handiwork of some vigorous youths who spend their summer days removing invasive species from these kinds of places with no names.

I’ve never actually been down this river, never hiked along this kink. So, why talk about this, of all the millions of nameless splotches of land that we could pick from a satellite map? I write about this particular place because it is, as I write this, facing the grave threat of being named.

That’s what the Bureau of Land Management (BLM) has decided to name this place. And if we zoom out on the satellite image a few degrees we can see why. 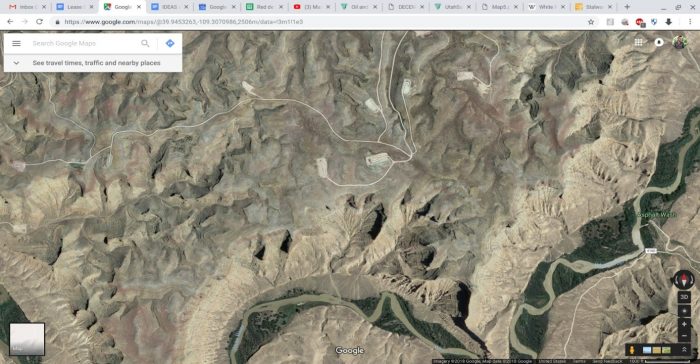 See those strange tentacles above the river? Those are well roads that, eventually, connect back up to paved roads, to highways, to Vernal and Salt Lake and Denver and Oakland. These small roads have their own names, such as “Well Rd 4304738817.” Attached to the end of them, like dog tags, are those flattened boxes of land, pads where trucks can suck up fracked gas and pumped oil.

Let’s zoom out a bit more. 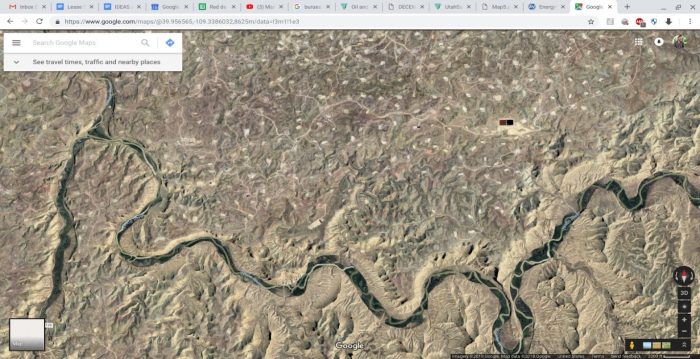 A spaghetti noodle mix of well roads and pads knot the land to the north of the White river for miles and miles. It reminds me of a sea turtle caught in a fishing net, this land. All land that the BLM has previously leased to oil and gas companies. Each plot with its own, equally abstracted name.

The thing about this kink in the White River, “UTU93656,” is that the land beneath it hasn’t yet been fracked. If you look to the south of the river, you can see that the land is grooved by mountains and canyons, rather than roads. But that will likely not be the case for long. 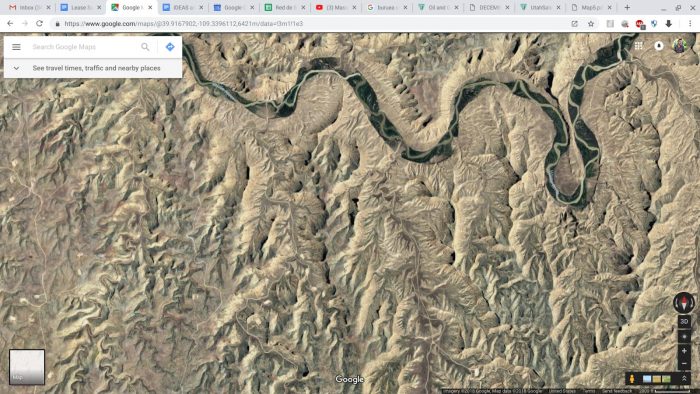 UTU93656 and ten other parcels of land in this area were leased to a company named Baseline Minerals Inc. on December 11th, 2018.

Through the eyes of Bureaucracy

Here’s how the BLM announced the sale on their website: “In keeping with the Administration’s goals of promoting American energy independence, the Bureau of Land Management (BLM) Utah quarterly oil and gas lease sale resulted in competitive bids for 96 of the 105 parcels offered in the Canyon Country, Color Country, and Green River Districts.”

The rest of the announcement reads like an advertisement for the fossil fuel industry, explaining how “The oil and gas industry on public lands in Utah contributed $2.6 billion in total economic output in FY2017.” The stewards of our ‘public lands’ now speak like this, parcels and dollars and fiscal years. Not a word about rivers or elk or water or sagebrush or aspen.

The only place where the BLM lists anything specific about the life of this land is in their listing of the laws and regulations that apply to each leased plot. For UTU93656 those include “UT-S-01: Air Quality,”  “UT-S-218: CSU – White-Tailed Prairie Dog,” and “UT-S-230: TL – Crucial Deer and Elk Winter Range.”

The air and the prairie dogs and the deer have been abstracted into these laws that are listed in some obscure .pdf document. Who believes that these laws, weak as they are, will be enforced? Who will visit this kink in the White River to note the quality of the air there? Surely, such fine-tuned enforcement is not aligned with “the Administration’s goals of promoting American energy independence.”

No, if we want a glimpse at how the BLM and the oil and gas industry view the world, we need look no further than the map they use to parcel out this land. It’s not a hand drawn map, made by someone who’s actually explored the region. Nor is it even the ‘scientific’ satellite maps that we’ve been viewing. It is, instead, a project of pure and total abstraction: perfect squares plotted into a rectangle, labeled with numbers, numbers, numbers. 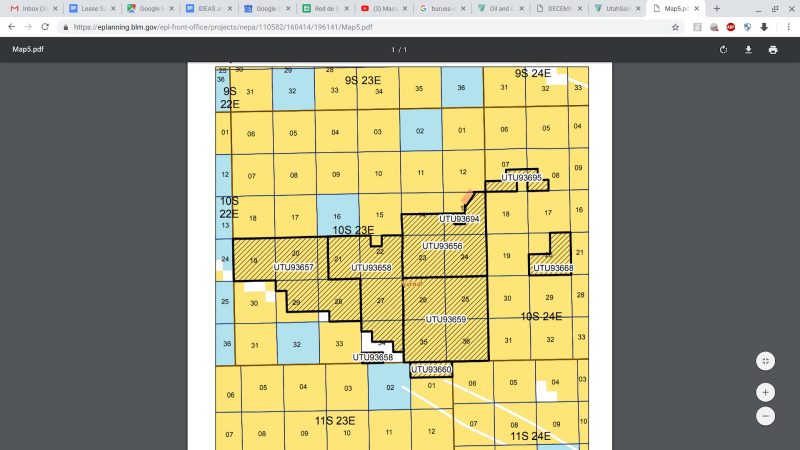 There are no animals on this map, no grooves representing the mountains and canyons. There is not even a river. The kink in the White River is within UTU93656, probably in quadrant 24, but there’s no way to really know. This is how a nameless place becomes a number, how a river becomes a dollar sign, how everything worth loving get turned to square plots and graphs and stock exchanges.

But what to do about it?

But abstractions are, for all the damage they can do, weak. They have not the structure of bark, nor the fluidity of water. They’re only as strong as our collective belief in them. If we put our belief in the sanctity of that nameless kink in the White River, rather than in the economic benefits of developing plot UTU93656, we are beginning to restore the world to its pre-named wonder. 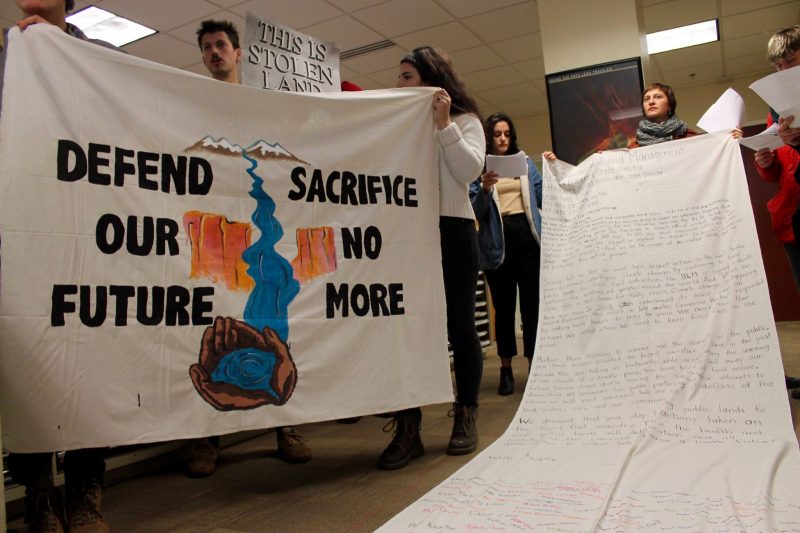 Belief begets action. As we see with these brave water and land protectors who disrupted the very lease sale that included this kink in the river. As we see with the Sunrise movement pushing Democratic leaders for a Green New Deal. As we see with indigenous-led campaigns to resist mining on the Colorado Plateau.

Together, we can shatter the grids that have been lain over the earth, and we can live in a world where we describe the places we love by the trails that lead us there, the animals that live there, the curvature of the river, the smell in the air, the feelings that flutter in our chests when we are there. None of us will remember the name UTU93656, anyways.