Bighorn Sheep, How do they survive on that? 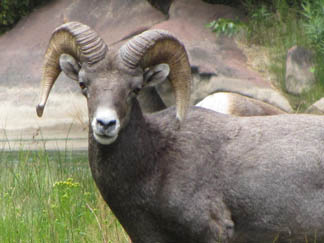 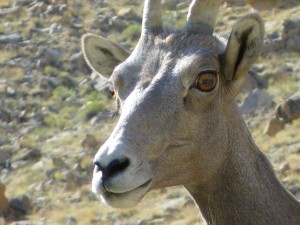 We don’t just eat on our Main Salmon trips, we feast. Hearty breakfasts, big lunches, delicious dinners, and sumptuous desserts are staples of our river expeditions. We also bring snacks, appetizers, and soft drinks to ward off the first pangs of hunger.

But we’re not the only large mammals in the canyon. Bighorn sheep are often seen on the rocky banks. They’re rather big, weighing about as much as an average human (115-180 lbs), yet they subsist on nothing more than grasses, shrubs, and forbs they find on the barren cliff sides. If you or I were forced to survive on their diet, we would die.

I often think about this dichotomy as I’m baking, pan searing, barbecuing, boiling, stirring, peeling, chopping, or assembling our rich meals. But it really strikes me as we’re eating. How do sheep subsist on such meager rations? I glance at my plate; it’s stacked with high-vitamin fruits and vegetables, high-protein meats, high-energy carbohydrates, and refined sugars. Then I glance to the sheep on the opposite shore; they’re eating desiccated plants. What’s more, I’ll be ready for another rich meal in a few hours. The sheep will never eat such rich food. How on Earth do they survive? 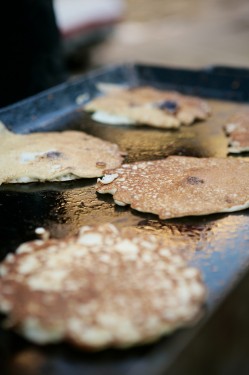 Then one day, I ran across an interesting statistic: the human brain is 2 percent of our total body weight, yet it consumes 20 to 30 percent of our calories. Translation: our brains are a terrible liability in a vast, rocky, food-scarce environment. On the other hand, bighorn sheep have never been known for their smarts. Their small brains use much, much less energy, which is an asset in the steep canyons of the Salmon River. The tradeoff is obvious. Humans take credit for Plato and Shakespeare and sheep score a zero for intellectual prowess. However, the Bighorn’s power comes from a finely tuned ability to survive indefinitely in a brutal environment.

By contrast, humans require piles of provisions to survive in that environment. And fortunately, our big brains have invented grocery stores, block ice, and big coolers that we stuff full of tasty vittles, lash to our boats and haul into the middle of the Idaho wilderness.

Speaking of which, I’m ready for a snack.