At River Level: Memories From the Green 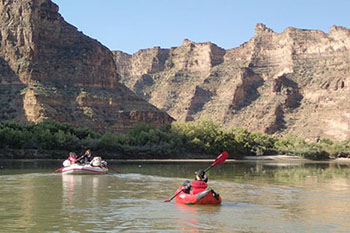 Stretched out on the warm sand that August evening, I was listening to the murmur of the river as it rippled and eddied past our camp. Dinner was done and our two guides, Nik and Ellie, were catching a bit of rest on their rafts. Over by the kitchen table my wife was in deep discussion with an inner-city schoolteacher from Brooklyn. Next to me on the sandbar was a couple from Baltimore along with their two grandchildren, ages eight and ten. We were looking forward to seeing a brilliant Western sky on this crystal-clear night in Utah’s Desolation Canyon.

This is the hour I appreciate most on river trips, when twilight merges into darkness and conversations flow as easy as water. Before long Vega, Altair, and Deneb, the bright beacons which form the Summer Triangle, appeared overhead. Constellations took shape, spelling out ancient stories. The Milky Way gradually emerged as a star-river flowing from horizon to horizon. 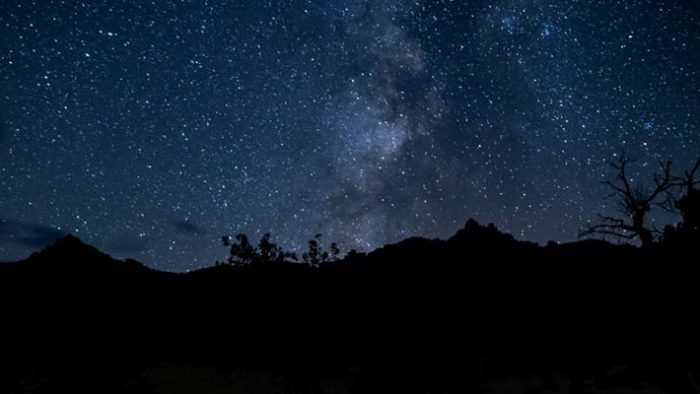 The five of us were taking all this in when a meteor streaked through the southern sky from west to east, flashing brighter than any star or planet. The bolide exploded into colorful fragments before burning out toward the horizon. I gasped and shouted to the others, who unfortunately didn’t catch it. After calming down, I told my companions that it was one of the best I’d seen in my life. (See: Stargazing Trip Series) 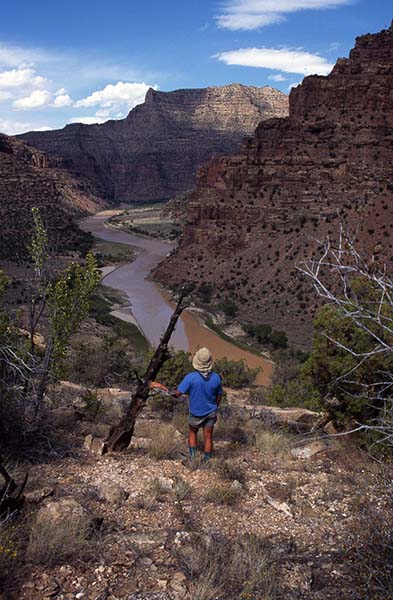 Every river trip presents a moment that stands out in memory, lingering long after the sunburns fade and the boats and gear are stowed. For many folks it’s the ride through a wild rapid on rivers like the Green, Yampa, or Colorado, but I like to recall the quieter hours–the sunrises on canyon walls, the heron standing stock-still at the river’s edge, the beaver swimming downstream with a load of fresh willow branches in its mouth. These episodes always seem to suggest an older, more peaceful era.

One morning shortly after leaving camp, we spied a dozen turkey vultures resting on a sandbar, their black wings lifted at odd angles, like players in an avant-garde theater. Birders call such a gathering of vultures a “committee,” which seems apt. The birds apparently put themselves into a hypothermic state at night to conserve energy, and this spread-wing stance is how they restore their body temperature. We found ourselves performing a similar ritual every afternoon, lounging back on the rafts after taking a cooling dip in the river.

A few days later and many miles downstream, the high cliffs of Desolation Canyon gave way to the more rounded contours of Gray Canyon. Here Ellie pointed to some rock layers high on a wall to the west, which represented the flash in time sixty-six million years ago when a truly giant meteor struck the Earth. The globe-circling cloud of dust it raised sealed the fate of the Earth’s saurian denizens. Seeing this made me appreciate our geologically quieter era.

Every young person should have the chance to spend time on a river, free from the constraints imposed by motors and dams. Watching the two boys playing at the river’s edge, skipping stones and drawing figures in the sand, took me back to my childhood in Iowa and the days my brother and I spent on the sandbars of the Missouri River. I wanted these boys to gain a feel for the wildness of this place, to let the river plant in them the seeds of a deep understanding of the natural world. They, like us, had spent their days in “Deso” untethered from any electronic device, and I think the experience will stick with them.

As the boys paddled the inflatable kayaks our guides had brought along, learning to read the river’s current, you could almost see something taking shape in their minds. They—and we—spent six days viewing the stars overhead, witnessing the herons’ graceful flight, and tracing the myriad animal tracks along the river’s edge. Such lessons are present on every wild river, available to all who choose to wade in such waters.

Fred Swanson and his wife, Bessann Swanson, live in Salt Lake City. Fred is a writer and historian (www.fredswansonbooks.com), while Bessann is a watercolor artist (www.bessannswansonart.com). They enjoy Holiday trips with their daughter, Ellie, who has guided with Holiday for the past six summers.