Anatomy of a Drying River 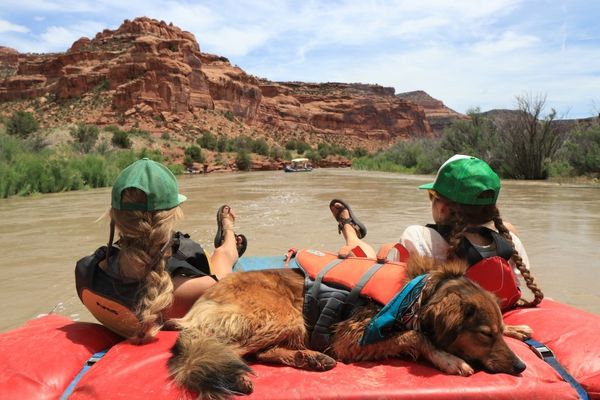 Some landscapes stick with you long after you leave – swirling memories of canyons and the call of canyon wrens take you away from the monotony of everyday life. The Dolores River in southwest Colorado is one of those places.

Located in the southwestern corner of Colorado, the Dolores River begins as snowmelt near the mountain town of Telluride. 241 miles long, it flows through numerous diverse ecosystems, beginning with meandering cobble bars and banks lined with mountain cottonwood, then down through breathtaking ponderosa pine forests with soaring terracotta cliffs looming on either side of the river. As elevation drops the river weaves in and out of steep canyon walls, each section with its own unique character. A modest tributary to the Colorado River, the Dolores joins the Colorado in Utah, northeast of Moab.

The Dolores became a popular local boating destination in the 1970s, renowned for challenging whitewater and stunning scenery. However, excessive human demand coupled with the millennial drought and increasing aridification in the past 25 years has exponentially reduced the number of boatable days, and in some years the river has even run dry. 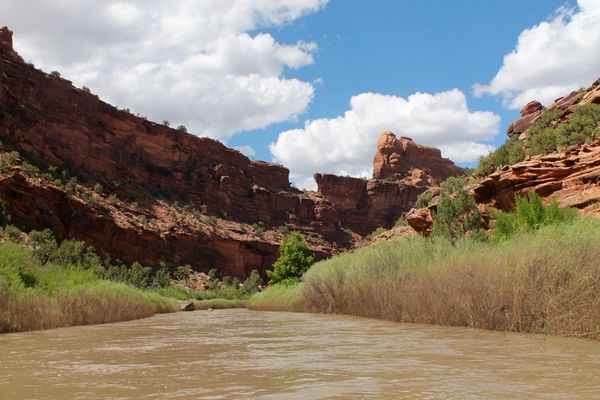 How did one of the best rafting trips and phenomenal riverine ecosystems become a mirage? In many ways, the story of the Dolores is that of all water in the west – but it also is a situation unique to the Dolores River and southwest Colorado.

Before being dammed, and during phenomenal snow years since, the Dolores is one of the best rafting trips in the West. During the boating heydays in the 1980s and 90s, over ten companies had permits to run commercial trips at any given time. Customers and private boaters were able to experience a variety of multi-day trips ranging from three to ten days or more — a multitude  of opportunities that is hard to find on most rivers

It’s not just the variety of trip lengths that make the Dolores extraordinary. The Dolores ranges from mild and friendly rapids and amazing scenery to the harrowing whitewater of Snaggletooth rapid, allowing people of all ages and skill levels to experience the river. Furthermore, the wilderness experience extends from McPhee Dam all the way to Utah, with very few sections passing roads or buildings. The likelihood of seeing wildlife is high, and the rare plant communities and geology are sure to make a naturalist out of us all.

Boating is really only possible during years when the reservoir is filled and there is excess water, an event called a “spill.” This has only happened seven out of the last 22 years for durations spanning from four days to two months – such an unreliable track record makes it challenging to plan a trip.

Now, only a few outfitters, (including Holiday!) hold permits in the surprise chance the Dolores will run. A decision made by water managers often at the last minute makes it hard to train guides, market trips, and have the resources to get clients down. This has implications for the general public who want to experience this place, as well as outfitters and rural communities who benefit from tourism and recreation. However, the reasons the Dolores rarely runs anymore are complex, with limited and challenging solutions. 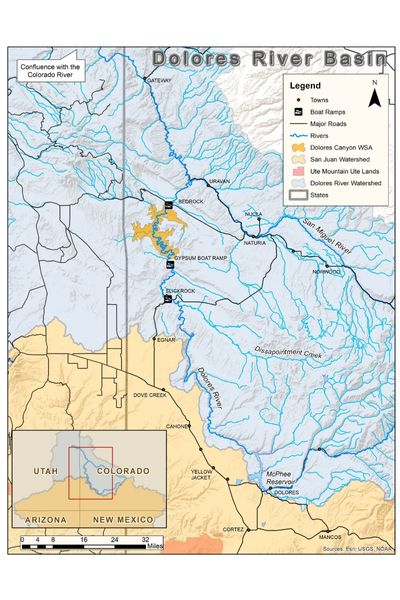 Named by the Spaniards during the famous Escalante and Dominguez expedition in the 1700s, the  Dolores River can be translated as “river of sorrow.” Unfortunately, the name has turned out to be prescient, in that there is rarely enough water to support local agriculture, recreation, and most notably, the river itself.

Large-scale agriculture requiring water diversions by anglo settlers began in the late 1800s, but the river was really altered in the 1980s when McPhee Dam and Reservoir were built by the federal government as part of the “Dolores Project” to increase irrigated agriculture and to fulfill the much-needed Ute Mountain Ute Tribe water settlement rights.

Agriculture is the largest use of water in the Dolores River Basin by far, responsible for irrigating nearly 60,000 acres. Primarily, forage crops such as grass hay, alfalfa, and wheat are grown and lands are often managed for cattle. While it’s common that agriculture is the largest user of water in western watersheds, nearly all of the agricultural water use from the Dolores occurs out of the basin. This situation of water being transported and used outside of its basin of origin is called a “trans-basin diversion.”

Part of why trans-basin diversions are so common on the Dolores is simple geography. When you look at most watersheds on a map, they appear like a leaf – multiple veins flowing towards the center of the leaf into the stalk, or in the case of a watershed, tributaries flow downstream to create a major river. This usually means water use by humans is spread out within the watershed, and any water not consumed or evaporated eventually flows back into the river, or at least helps to recharge groundwater in the basin.

However, the Dolores watershed is a bit lopsided, in that the main leaf stock is on the edge of the leaf rather than in the center. Therefore, the river is on the edge of the watershed, making it easy to extract water out of the basin of origin. While it makes sense to use water on the most productive lands, it also means that no water gets returned to the Dolores after it’s used by farmers, ranchers, and municipalities. 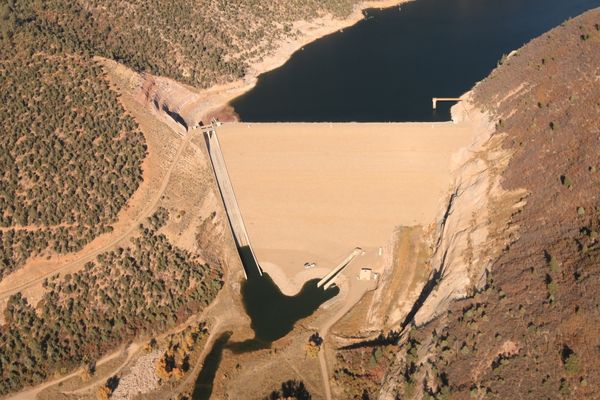 One of the major reasons the Dolores below McPhee Dam is drying up is simply because of Colorado’s priority water rights system. When the Dolores Project and McPhee Reservoir were built in the 1980s, it allowed more water to be developed and additional water contracts to be allocated, both on Ute Mountain Ute lands and on traditionally dryland fields near Dove Creek, Colorado. “Project” water also includes water allocated for the downstream fishery and small municipalities, such as Cortez and Dove Creek.

A full allotment for the downstream river and fishery is just over 30,000 acre-feet, a far cry from the over 300,000 acre-feet that the Dolores above McPhee Reservoir receives annually on average.

Prior to McPhee Reservoir, a large amount of water was being diverted by a private mutual ditch company called Montezuma Valley Irrigation Company (MVIC), and because of their seniority, they are able to receive the amount of water they historically diverted and used before any other user receives water. This means, that in shortage years when all the aforementioned Project water users share in shortages, MVIC is relatively insulated and is able to receive their full, or almost full, allocation of water.

Shortages have been getting more and more common, and last year Project water users only received about 10% of their water – including the downstream river. Given the extreme lack of water,  the river is becoming more channelized, native fish are struggling, and vegetation is growing in the middle of the river. In other words, the lack of high flows, especially during spring runoff, is changing the downstream environment, and not for the better.

Despite her high elevation beginnings, the Dolores flows through an arid landscape that is also in the bullseye of climate change-induced warming. The Colorado and Rio Grande River systems have seen massive shortages of water in the past few decades because of warming temperatures.

However, research has shown that climate change is impacting the Dolores Basin at an even greater rate than northern tributaries to the Colorado River. Flows in the Yampa and upper Colorado River basins over the past 20 years compared to the 20th century have declined 6%, whereas flows in the Dolores River during the same time period declined 21%,

Climate change is and will continue to drastically affect flows in the Dolores River, and inflexible water management is compounding these impacts. It will be critical for both farmers and the river to reexamine how much water is actually available in this new era of aridification in order to preserve economic livelihoods, small communities, and ecosystems.

It is up to boaters to love this river not just when there is water, but also when she’s almost running dry. It takes a whole community to advocate for a healthy river, help engage in solutions, and become active stewards and caretakers.

As water becomes more and more scarce, we must advocate for values that matter, and think of what we want the future to look like. There must be ways to balance the economic necessity of agriculture with the health of over a hundred miles of river, but it is going to take perseverance, a desire to make the world better for future generations, and a whole lot of passion for places that matter.