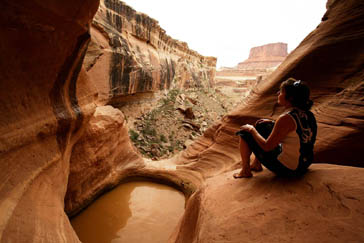 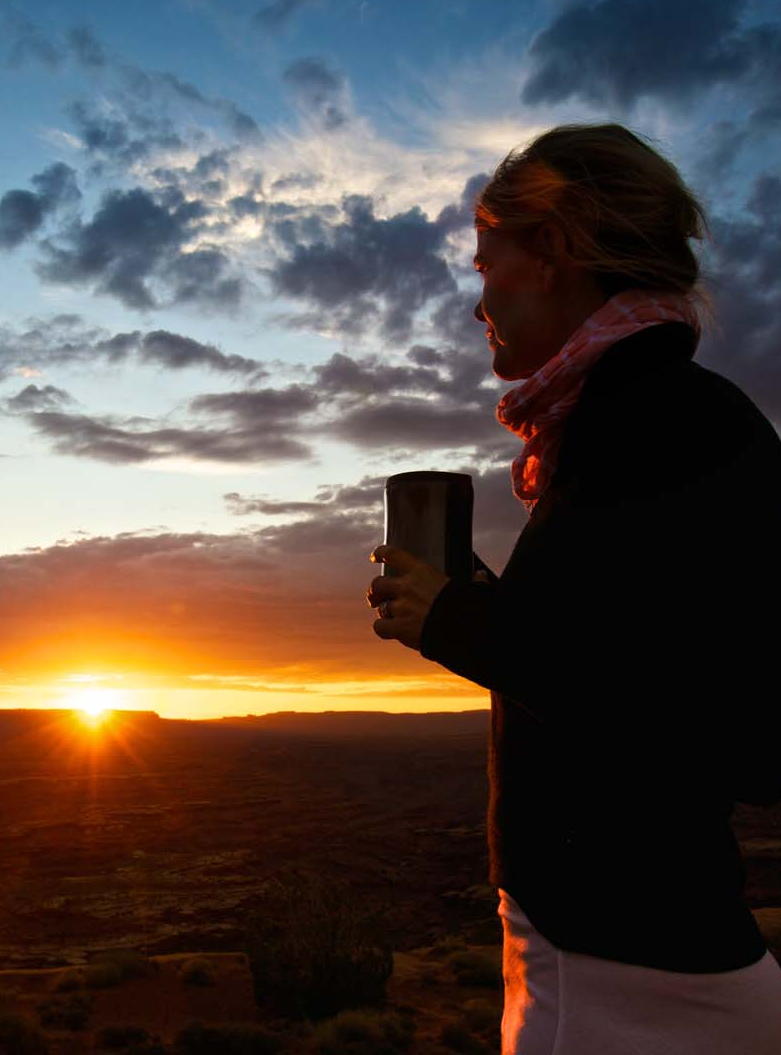 A Perspective Check. While comfortably ensconced in the backseat of a van heading from Green River to the White Rim trailhead, our guide dispersed some handouts to familiarize ourselves with the “do’s and don’ts” of mountain biking this 100-mile trail that runs deep into Canyonlands National Park. “Pump your brakes going downhill;” “drink before you’re thirsty, eat before you’re hungry;” “Ride predictably, defensively, and in a straight line.”

Though the typed, practical advice proved to be worthwhile suggestions, I learn by doing. Pushing pedal hour after hour, day after day, through terrain that felt at times like I had been painted into it. Its scenery was so flawless you had to do double takes to ensure you saw it right—presented me with additional advice. The kind of advice that is felt from the inside out;  deep down you know it, you just need the space and time and natural environment to remember it. 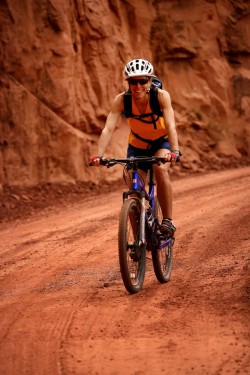 I remember this advice from a friend some 15 years ago when I first put my butt to bike seat on a dirt trail. It seemed too simple, but every time I’ve tested it, it has proved true. Whether it is road ruts or a rocky drop off, if I focus on where I want to be and not on where I’m afraid of going, my bike mysteriously heads the way I need to go. I’ve never forgotten this advice because it has proved true in life as well. Not that I’m a quick learner. I’ve spent more time than I want to admit spinning my wheels and going nowhere. Why? Because my thoughts were focused on what I didn’t want to happen, or who I was angry at, or what I feared happening…

Riding the White Rim wasn’t always easy. It took stamina, concentration, some guts at times, but it was increasingly empowering. Each day, I trusted my bike and my skills more. Yes, my bike could roll over rocks and take corners. Corners that I at first feared would stump the bike, pop the tire, or lay me out on the ground. The more I trusted my bike, myself, and focused on where I wanted to take the two of us (we became quite close), the stronger and faster I got. As we all know, life can throw some humbling obstacles into your path. I was reminded that if you focus on where you want to go, you can navigate your way through these obstacles and keep movin’ along. 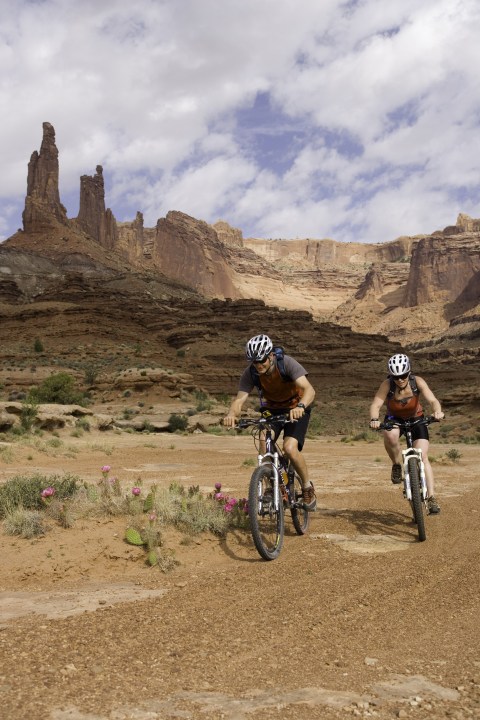 “Sand Happens.” You’ve seen the bumper stickers, the T-shirts. The White Rim Trail is named after the thin, durable layer of White Rim Sandstone that was deposited some 225 million years ago. Among these deposits is some very soft sand—baby-powder fine. It feels great beneath your toes or sifting through your fingers, but under a bike tire, it feels like quicksand, especially if your momentum slows.

Ever hit quicksand in your life? That point when you want to give up. Nothing seems to be happening fast enough. Or it feels as if the world is constantly kicking you in the seat of the pants. Hitting the sandy spots on the trail did get easier as the days passed, but I had to first accept that moving slow and steady through it was okay. I was still making progress. Relinquishing control and accepting where I was and how to best move through it echoed a state of mind relevant to certain times in my own life.

The more I relaxed and quit trying to overpower these patches, the more fun I had with the challenge of navigating them. I experimented: racing into these patches with plenty of momentum in hopes to avoid having to pedal at all through them; following established tire tracks in seeking more solid ground; outsmarting it all by hugging the furthest edge of the trail where the sand was not as deep. It sometimes worked and sometimes I just walked my bike through it while taking in the view. It was all part of the journey—I don’t believe we were ever guaranteed a smooth ride indefinitely.  Enjoy the slick rock while you have it. 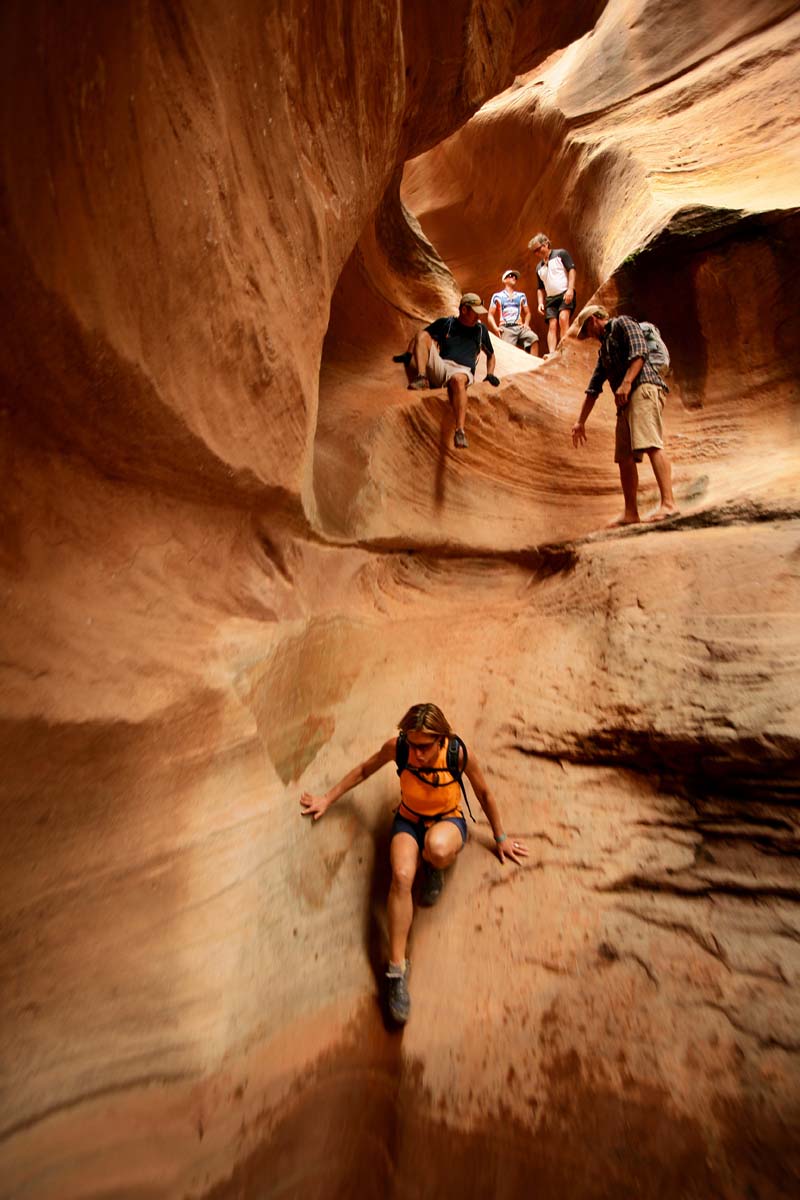 The trail was laid out like a dusty red carpet for us. The White Rim is an old jeep road leftover from the uranium rush in the 1950s and cattle ranching prior to the park’s establishment. As a result, desolate dirt roads can be found far from anything in the midst of the 527-square miles of Canyonlands National Park.

While the White Rim trail showed us the way—at times weaving along the edge of a mesa with vertigo views of red-rock skyscrapers or meandering through sage, yucca cacti, and late autumn bloomers—it still required navigation skills. Certain parts of the trail were rocky and jutted. They required a solid grip on the handlebars and a strict focus on the line you were picking to travel through this mini obstacle course. No time to hesitate or second-guess yourself on two spinning wheels. These moments of decisiveness followed by a commitment to the path you’ve picked came up again and again on the trail.

Picking a line and following it in life can require even more discipline and attention. I’ve interviewed many successful people who had met failures and obstacles on their path to becoming a doctor or an author or a mother or a Paralympian or an artist. Some of the obstacles thrown their way would have stopped me—obstacles far bigger than rocks and efforts that required following “lines” lasting years in order to achieve their goals and dreams. Hard work, discipline, and regularly kicking thoughts of self-doubt out of the thought-factory all came into play. 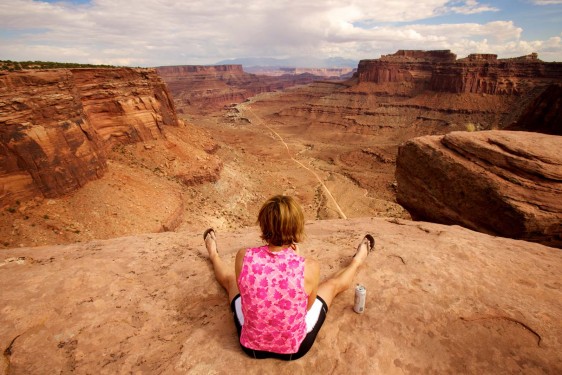 Part 4    Are Your Problems Big or Small?

A phalanx of red-hued Cedar Mesa Sandstone spires towers over the southeast corner of Canyonlands National Park, known as the “Needles” (the Needles District). Even at a distance from the edge of the White Rim Trail, their ancient presence and power is felt, as they stand at attention.

The White Rim Plateau, with its ribbon of road on it (the White Rim Trail) is named for the thin but hard layer of White Rim Sandstone that was deposited some 225 million years ago at the top of a geologic layer called the Cutler Formation. This plateau lies between the river gorges below and the mesa tops above.

The Shafer Switchbacks drop over 1,000 feet from a plateau in Canyonlands’ Island in the Sky District down to the White Rim Trail. Talk about a perspective check. You slip back in time as you pass each new rock layer formation. People, bikes, 4-wheel drive vehicles all shrink against the drop back of the sheer red rock cliff faces and the birds-eye view below. 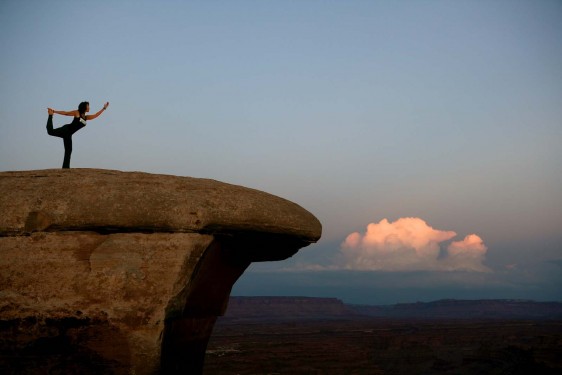 Being in this environment offers a perspective check on life. Providing you the distance from the concerns or habits or stresses that take over back at home. One of my fellow White Rim riders felt it profoundly. “I’ve been in some dark places with some difficulties in my life this past year, and being out here reminds me there is a whole other world that exists out there—a beautiful one. Being here has allowed me to see beyond my struggles and reassured me that they will pass, just like the thunderstorms do out here.”

I found that space, beauty, fresh air, and movement clear the clutter from the mind, allowing for a better sense of what really matters.