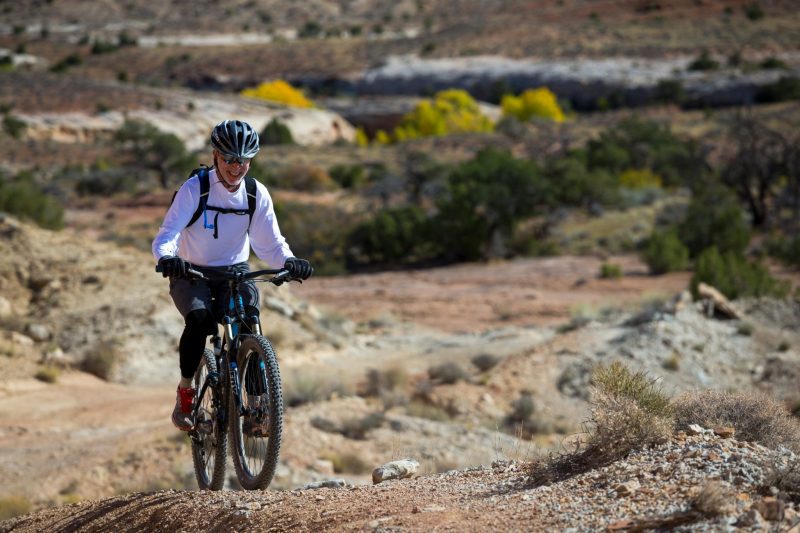 Unless you are in the Southern Hemisphere or in some low-lying desert like Tucson, AZ, the mountain biking season is coming to an end. But what better time is there to plan your next next season than when you are still a little bit saddle sore from your last ride? Late spring weather makes for beautiful riding in Utah, and that’s only a few short months away.

Just in case you need an extra kicker to get your calendar out to make some plans, here are 5 reasons that you most definitely want to be mountain biking in Moab sooner rather than later. 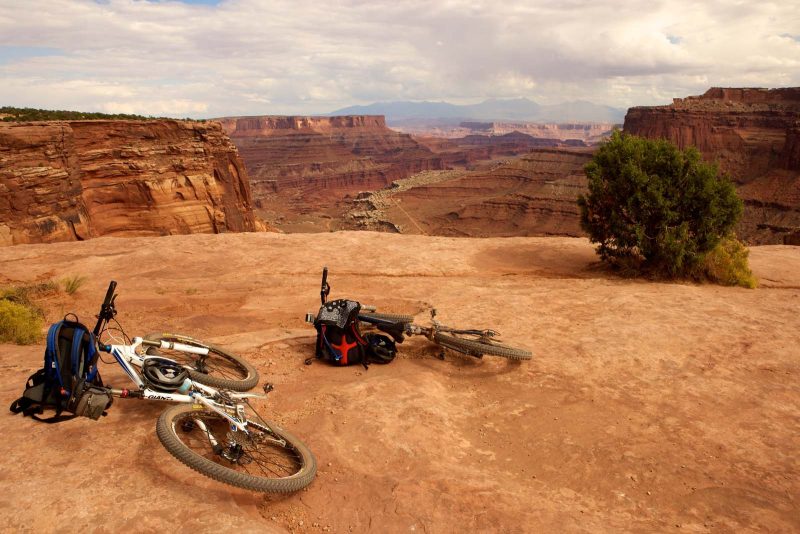 If you’ve ever hiked around Moab (or anywhere on the Colorado Plateau),  then you know the feeling of rubber soles gripped to ‘slickrock’. Your foot sticks like a soccer cleat in grass but then it lifts as easy as a dancer’s ballet slipper. Now imagine that same sensation while riding your bike: perfect traction for pumping up a killer incline or pounding down a steep decline. The ideal rock wave under your tires as you speed along cliffsides. Like riding on a gigantic piece of sandpaper that just happens to be surrounded by some of the most beautiful scenery in the world.

Seriously, Southeastern Utah is premier, world-class mountain biking territory. Moab is listed as the number one mountain biking town on this recent National Geographic list. There are literally hundreds of 4-5 star rated trails in the area. Plenty for you to explore. And you can join our expert guides, on one of Holiday’s biking trips in the area. 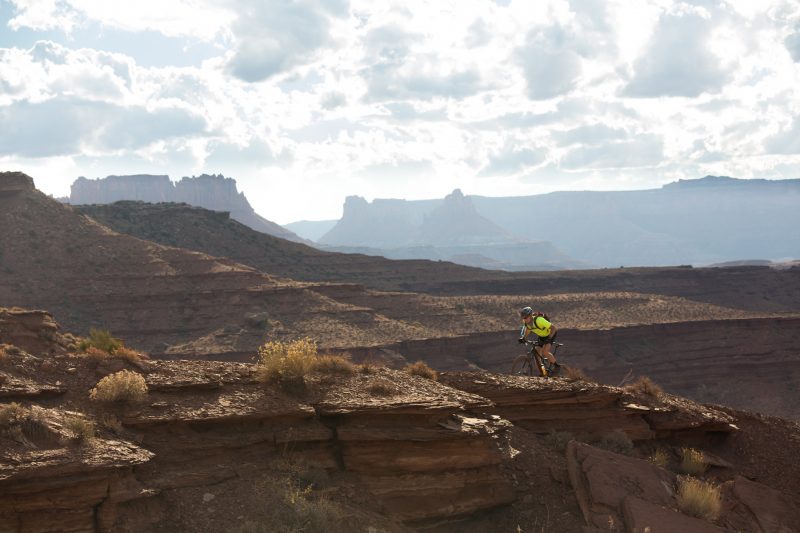 I know what you may be thinking: mountain biking is not relaxing. And you’re right, in a way. It’s an intense workout for your calves, thighs, core, and even your arms. But anyone who has been on a long bike ride knows that once you hit a certain mile, your body begins to work itself into a rhythm. Your legs pump automatically, even as you travel uphill, and the rest of your body adjusts in subtle movements to make you a graceful little machine. In fact, bicycles are considered the most efficient human-powered machines in the world because they harness the movement of our bodies so well.

When your body can get into that rhythm, it’s the ideal ‘flow’ state. Your mind can switch into another mode, one of slight euphoria and effortless concentration. As a writer, this is when my best ideas come to me, and it’s why I try to ride up City Creek Canyon in Salt Lake City at least three times a week. It’s a sort of meditation, an inspiring and rejuvenating spiritual zone. 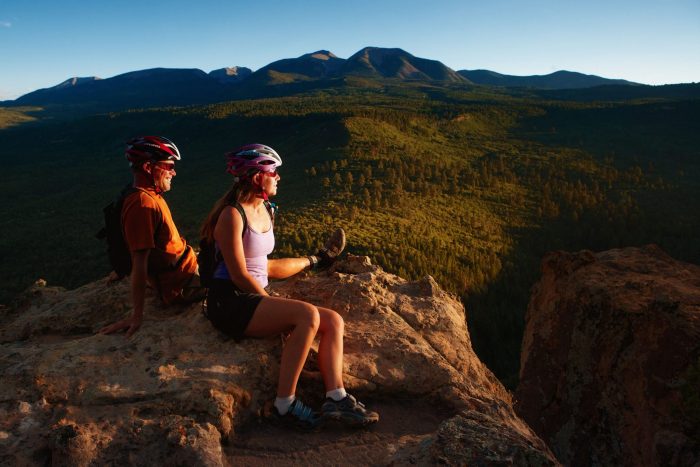 To call Utah geologically diverse is an understatement. On one side of Utah you have the beginning of the Rocky Mountains, with multiple 14,000+ ft. peaks. On the other end begins the Mojave Desert, the lowest and hottest part of the United States. In between these two there’s the vast rises and falls of the Great Basin, the spectacular stratification of Zion National Park, the twisting, breathtaking canyons of the Colorado Plateau, and so much more. Even Utah’s smaller wonders are world-class.

Among those ‘smaller’ wonders are the La Sals. A solitary and breathtaking mountain range, surrounded by a sea of red-rock. Due to ancient magma bubbling up under the surface of all that slick-rock and then never quite breaking through into a volcano, the La Sals stand tall as a geologic anomaly to their surroundings and a dizzyingly rapid geographic departure from the rest of the red-west. Join Holiday on a Westwater, La Sal Bike Combo trip to ride over some of the best the La Sals have to offer. 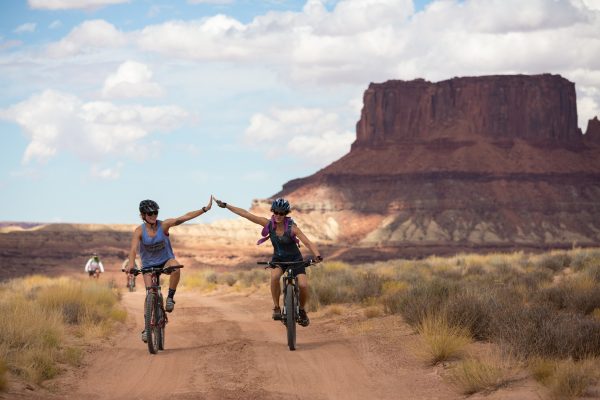 I like to stay in shape, but I don’t really want to be huge and muscly. Still, sometimes when I see a mountain biker riding up a trail, I do envy their perfectly cut calves. Like a rock climber’s forearms, there’s something about that sculpted appendage that just looks so good! Whether you are trying to build muscle or just keep a healthy heart rate, mountain biking can be a helpful part of your health regiment.

It’s easier on your joints than running, and it’s a full body workout. Did we mention that it’s also fun. Very fun. So ditch the gym for a week and come get your workout along some of the most beautiful terrain in the world. 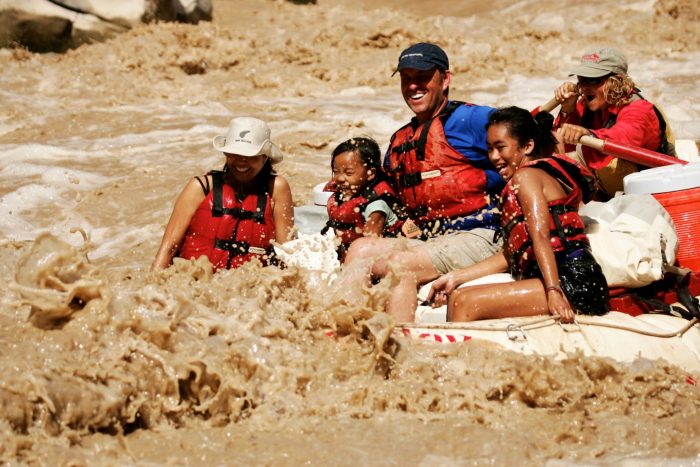 There is nothing like a little well earned rest. There is no better way to earn that rest than mountain biking. And no better way to enjoy that rest than floating down the river, cold beer in hand, taking in the one-of-a-kind sites of Utah’s canyon country. Holiday offers two amazing bike-raft combo trips for you to choose from. In fact, we are so dedicated to the combination of these two sports that we made it our website name. www.bikeraft.com!